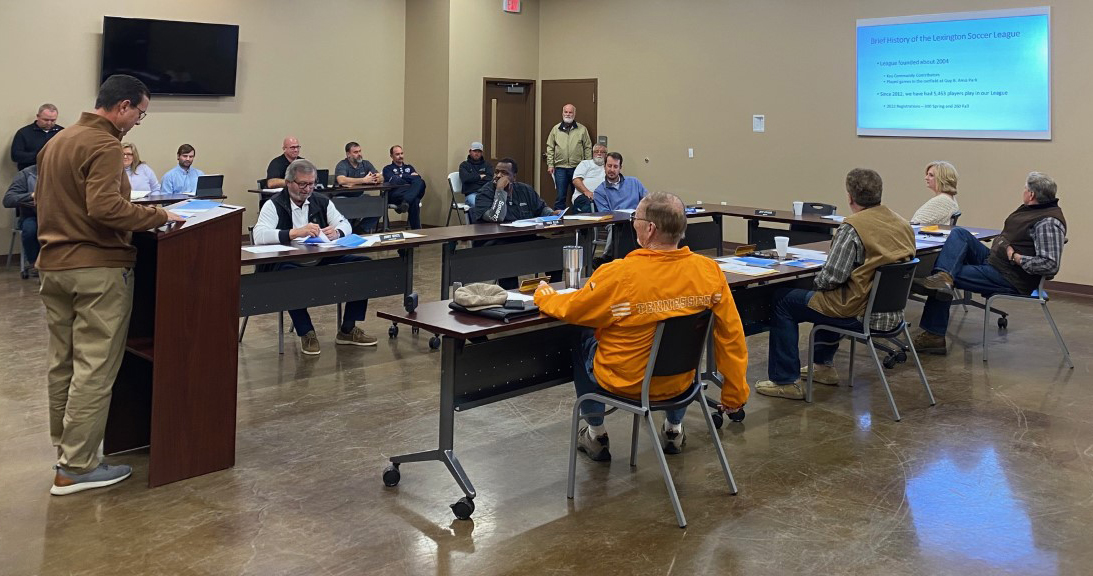 Phillip Renfroe, representing the Lexington Soccer League, thanks the board for its support of the league and sought improvements to the complex, during the November 28, 2022 city board meeting.
Photo by: Steve Corlew / Lexington Progress

The Lexington City Board worked through its agenda in a more somber mood, November 28th, with the recent death of long time city employee, Assistant Police Chief Barry Roberts on their mind.

The agenda took three hours for aldermen to cover with Sandra Wood presiding in place of Mayor Jeff Griggs, who was home sick.

Prior to the first item of business, Wood mentioned Roberts’ recent passing. “He was a pillar of this community,” Wood said. “We need to remember his family in our prayers.”

With a large crowd in attendance, Aldermen addressed a variety of issues from broadband and the city soccer complex to a charter change and employee pay.

Other issues still lingered from months earlier remaining unresolved after the meeting. The largest contingent before the board represented the Lexington Soccer League, its board members, coaches, parents, and players.

Phillip Renfroe addressed aldermen, giving them a brief history of the soccer complex and the league. Renfore expressed the league’s thanks for the city’s support, but sought upgrades to the field’s lights, drainage repair and improved signing. Renfroe also asked the city to pursue a grant to upgrade handicap accessibility to the four fields.

“This is the best public soccer complex in West Tennessee,” Renfore said in describing the complex that was built in 2008 and completed in 2009. The complex consists of…