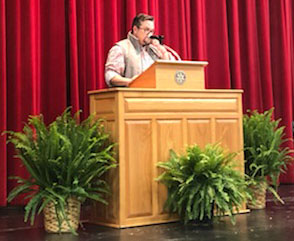 A Meet the Candidates public forum was held in the auditorium of Lexington High School on Monday, April 11, 2022.
Photo by: Blake Franklin / The Lexington Progress

The Meet the Candidates public forum, sponsored by Lexington Broadcasting WZLT-99.3 and The Lexington Progress, was held at the Lexington High School auditorium at 6:00 p.m., Monday evening, March 11, 2022. The master of ceremonies for the event was Lexington attorney Sam Hinson. “On behalf of Z-99 and The Lexington  Progress I’d like to thank everyone for attending,” Hinson said. “The format follows a three minute opening statement, and then a question and answer session.” Position to speak was determined by lot beforehand, and rotated.

Brad Atkinson began the opening three minute address. He said that he wanted to start off by clearing up some rumors that he was replacing the entire crew with one of his own. He does not plan to fire anyone doing their job, and has no plans to replace everyone with his own crew. Atkinson said that he started out law enforcement with the Lexington Police Department, and was there for four years. In 2004, he went to the THP where he currently now serves. He has specialized in narcotics seizures, which he learned under Todd Bowman while with the LPD. Fentanyl, he said, is deadly, and can kill thousands even in small doses, and is a severe concern in our area. His track record over the last year has cleared this and many other drugs off the streets. His plans are to create a special team to work narcotics, and he will personally be the leader of this team.

Sheriff Brian Duke said that he has served in the office for the last sixteen years, and is a graduate of UT- Martin, and has served in many law enforcement in many capacities over the last thirty years. He wants to continue to work with the commission so that each of the county schools can have their own resource officer. He also wants to have the re-entry program become a permanent part of the Sheriff’s Department, which will reduce the recidivism rate, and provide gainful employment.

There were two sheriff candidate questions, what are your plans for safer schools and more resource officers, and the second question was about their plans to reduce…