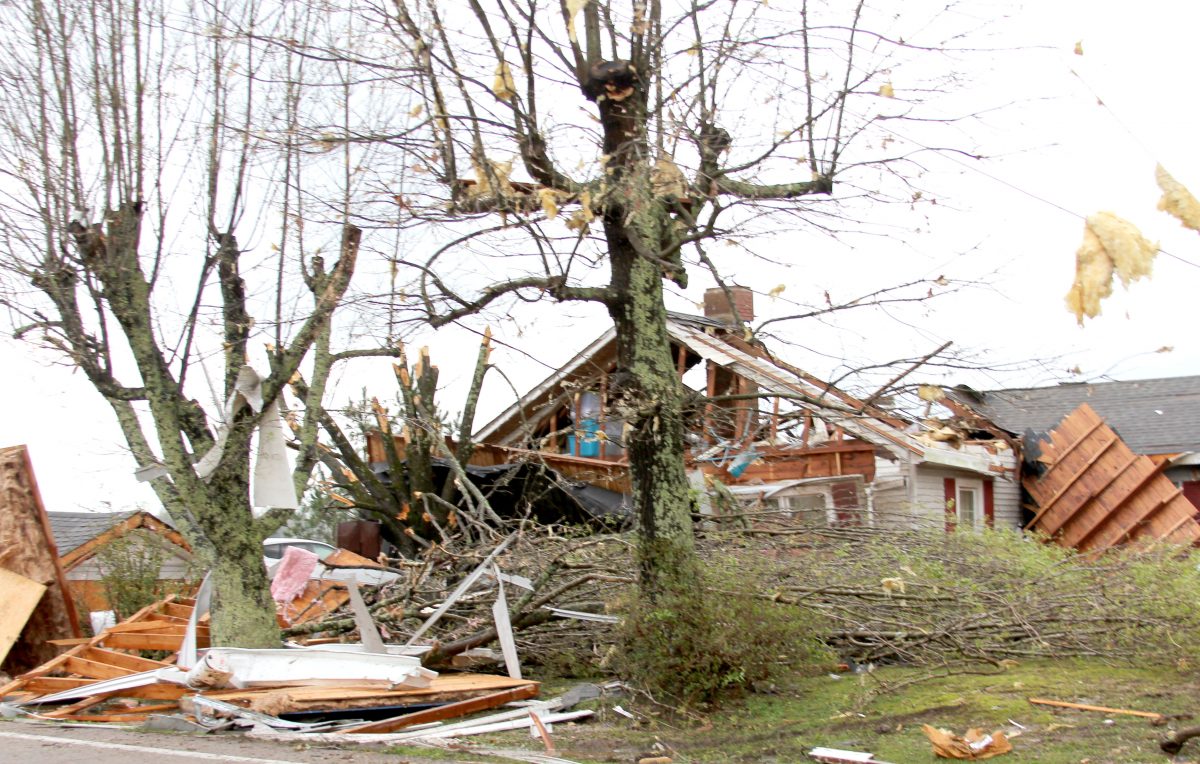 The same area was struck by an EF4 tornado in the early morning of March 22, 1952. Both storms struck buildings in the same areas some 69 years apart. Fortunately, there were no injuries in the storm on Saturday evening.

Middlefork, which lies nine miles from Lexington on Highway 22A, also known as Lizard Lick, is variantly spelled as Middle Fork from the old church and the creek of that name.

The NWS service said that the path width was 300 yards, and the path length was 3.1 miles. They estimated the peak winds at 100 mph, but the Storm Chasers group, that followed the tornado in, clocked it at 155 mph.

According to the NWS, “the tornado developed near the Chester / Henderson County Line. The first observed damage was uprooted trees along Mifflin Road. The tornado moved east and crossed the Boss Wadley Road.  Trees were uprooted and some trunks snapped in this area.”

“The most significant damage occurred near Highway 22A and Middlefork Road. A home lost part of its roof, several storage buildings were damaged and destroyed, and a tree fell on another home, damaging its roof.  The last observed damage occurred east of Highway 22A.”

“This tornado was broad and relatively disorganized for much of its lifetime,” the NWS said. Different residents said that they were fortunate that the storm was brief, from thirty seconds to less than a minute.

There was a second tornado northwest of Reagan, with winds peaking a 70 mph, with a width of 50 yards and a path of 0.6 miles that lasted from 4:54 p.m. until 4:55 p.m. This tornado uprooted trees along Highway 104, just northwest of Reagan.

In Lexington, and in other places around the county, there was road damage and water outages due to the flash flooding.  Forty feet of water line was washed out near the One Mile Branch Bridge on Old Huntingdon Road, leaving residents north of town without water or with low pressure.  Lexington Utilities had crews out during the rain to close off the leak, and teams on Sunday morning to repair the damage.  Lexington was under a boil water notice during most of Sunday and Monday and until noon on Tuesday.  Lexington City Schools dismissed on Monday and Tuesday due to the boil water notice.

Lexington Utilities General Manager, Michael Harper, provided some details on the water line break and repair. “During the storm we had several water lines wash out. The main one was one of the largest lines in the system. A 16-inch ductile iron line running along One Mile Branch. Approximately a 40 foot section completely washed out.”

“This line feeds all of the north portion of our system including the Timberlake Industrial Park, Parkers Crossroads, Volvo, Touchstone and the Justice Complex. Also included is every subdivision and residence north of the…