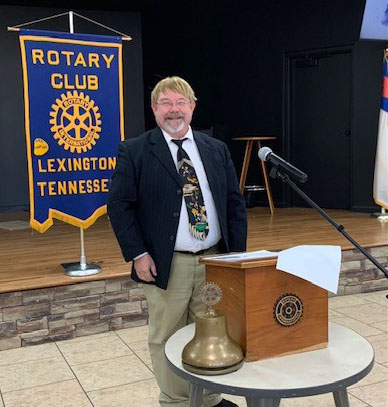 W. Clay Crook, a local historian and journalist for The Lexington Progress, was the special guest speaker for the January 12, 2021 Lexington Rotary Club. Clay brought some artifacts from the Civil War for viewing and made a PowerPoint presentation on the Battle for Lexington that occurred on December 18, 1862.

“Lexington is significant because it was the first battle, and the first victory, for Gen. Nathan Bedford Forrest during the West Tennessee Campaign,” he said. “A defeat at Lexington could have ended the entire campaign, but instead it set the tone and the momentum for the dash across West Tennessee and gave Forrest his two “Bull Pup” cannons that were used famously throughout the war.”

Lexington and Henderson County were divided during the War, but most men volunteered for Confederate service. They had fought a battle at Perryville, KY in September, and camps at Knoxville and Tullahoma, and by November were encamped near Murfrees-boro. Many of these men were in a brigade that had been isolated because of a smallpox outbreak, but had reformed by December 28th to participate in the Battle of Stones River on December 31st, the same day as Forrest’s engagement at Parkers Crossroads.

The only men from Henderson County to actually participate in the battle for Lexington were in the Federal 2nd West Tennessee Cavalry, more commonly known as the 7th Tennessee U.S. Cavalry. Much of the local traditions of the battle come from the descendants of these men like Ebb Deere, Ashley Adams, and Tillman Stewart.
Not much survived in Lexington from the battle except the corner of Franklin Street and South Main Street which were the last Federal…