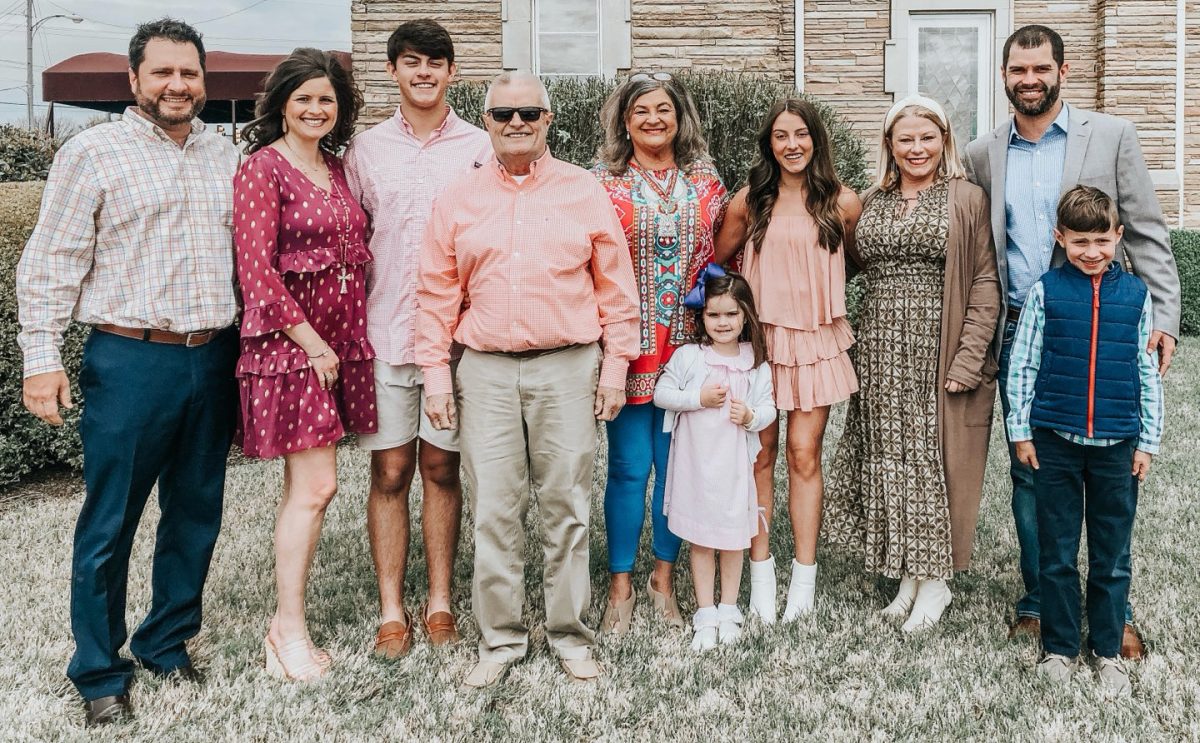 For only the third time in 138-year history of The Lexington Progress, the newspaper has new owners.

The paper was purchased by Mirror-Exchange, Inc., owned by Scarlet Elliot and Victor Parkins, second generation newspaper publishers. Their parents, Bob and Dorris Parkins started the Mirror-Exchange in Milan in 1966. The company also owns The Trenton Gazette, The Tri-City Reporter, and The Humboldt Chronicle.

The Franklin family had been publishing the paper since 1946, when it was purchased by W. T. “Jew” Franklin, Jr., and his wife Kathleen. Franklin became president of the Tennessee Press Association in 1973-74. He was instrumental in passing the Tennessee Sunshine Law, which requires state and local agencies to properly announce public meetings and open them to the public.

Tom Franklin became the publisher after his father’s death on September 10, 1980.

Tom and his wife Donna are retiring, and the family felt the new owners will continue the family tradition of the paper. “I felt like it was time,” Tom said. “I am looking forward to spending more time with my family.”

Victor came in and helped the Franklin family after Brad Franklin’s death in 2015.

“They feel like family,” Tom said, referring to the Parkins family. “They know the business and they will take good care of it.”

Tom’s wife Donna agreed, “we are both pleased with who we sold it to. Family is everything to us. It is important to have a small hometown newspaper, it is more personal,” she continued.

Donna also retired on Saturday, June 4, 2022, with 51 years in cosmetology. Over the years, she and the rest of the family have all worked at the paper at some point.

“The newspaper has been our way of life for all my life…from playing in the warehouse on large paper rolls as a little girl with Blake, to learning my first paper route, and eventually coming back here after college. This was not a decision my family took lightly. I truly believe God places people in our lives when we need them the most. After I lost my older brother and business partner in 2015, I couldn’t have survived here without the guidance Victor and Scarlet so graciously provided, expecting nothing in return. This newspaper wouldn’t be what it is today (and will continue to be) without them. Although I never had the privilege of meeting him, I can’t help but think about how proud Granddaddy Franklin would be to know this special family will continue the legacy he left the citizens of Henderson County,” Brooke stated.

When the opportunity arose, the family agreed there was no one else that they would want to carry on the tradition.
“Our family was grateful to the community,” Brooke stated. The Parkins are good people, and I will trust them to do what is right for the community and continue as a community newspaper,” she added.

Kellye Franklin shared, “In 2003 when I moved back to Lexington to start my life with Brad, I knew the paper would forever be a part of our life. Brad took immense pride in knowing he was continuing the legacy his grandfather started so many years ago. Along the way, Brad found someone who was a peer, mentor and friend in Victor Parkins. Victor provided him a “brotherhood” that was felt until he died in 2015. I am certain that this transition is one that is endorsed by Brad. It has been my privilege to watch Brooke and Blake grow in their roles at the paper, and I thank Tom and Donna for always making me a part of this family and keeping Knox and Taylor’s interest in mind. All our best to Victor and Scarlett and the legacy they will continue.”

Victor Parkins serves as the Editor and Publisher of the Mirror-Exchange and oversees the operations of three other newspapers along with his sister Scarlet.

“The Lexington Progress has a proven track record of serving the people of Lexington and Henderson County and our goal is to maintain the same level of excellence to our readers. We look forward to filling our pages with local news our readers can relate to. And we’re always open to new ideas and cool feature stories,” Parkins stated.

Publisher William V. Barry founded the paper in 1884 on a small hand-fed press. The Lexington Progress was published by W.V. Barry and Sons until 1946 under the moto, “We speak of men as we find them and of lives as they are unfolded to us.”

The Franklin family continued to operate The Lexington Progress until the sale was finalized June 1, 2022.

For this and other interesting articles, see the June 8th edition of The Lexington Progress.