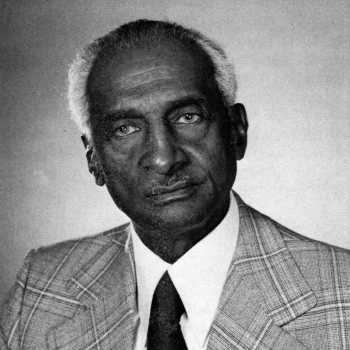 Professor A.L. Robinson was a former teacher for the Henderson County Board of Education until 1974.
Photo Submitted / The Lexington Progress

There are several tributes to be found online for Professor Arthur Lee “Rube” Robinson, who was one of the iconic figures from the old Montgomery School.

He was born in Linden, Tennessee, in 1906, received his bachelor’s degree from Tennessee State University in 1935, and his master’s degree from there in 1953. He worked as a teacher for the Henderson County Board of Education from 1937 to his retirement in 1974.

Prof. Robinson was also a noted sports figure in his college days, playing both offensive and defensive end at Tennessee State University from 1930 to 1934. He was inducted into the TSU Sports Hall of Fame on September 30, 1994.

One of the finer tributes to be found is from the 1996 Montgomery Alumni Reunion. “No man has remained at the helm of an institution for as long a period and with so much conquered. None other has won so many friends to such a significant cause. None other found the need to be true to such a unique beginning. Prof. Robinson, able teacher, leader in the area of education, traveler, scholar, and teacher has served with distinction as principal of Montgomery High School.”

“Fully cognizant of the problems faced by an institution of higher learning during critical times, Prof. Robinson has served with integrity and leadership ability so vitally to see that the school moved forward. Through it all, Prof. Robinson’s feet have remained firmly planted on the ground. He is a Christian gentleman of…