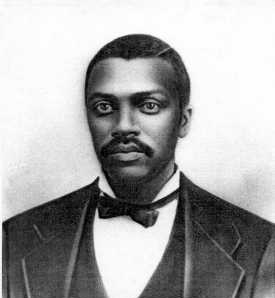 Dr. Robert S. Douglass was an early attendee of Meharry Medical College in Nashville, and practiced in the Union Crossroads and Bargerton area of northwest Henderson County. Jonathan K. T. Smith did some research on Dr. Douglass and found his photograph. To follow are some exerts from Mr. Smith.

A notable black citizen of Henderson County, Dr. Louis S. Douglass, was born in this county, October 1853, a son of Cato and Melvina Douglass who were bond-folk in antebellum times of Bryant Douglass, a prosperous white farmer whose land lay along what is now Union Cross Road.

After emancipation the Douglass family acquired, lived upon, and farmed about 160 acres adjoining their former master’s farm.

In December 1883, Dr. Lou bought 200 acres of the old white Douglass farm, including the homestead of Abigail, widow of Bryant Douglass. On this tract stood Dr. Lou’s residence, consisting of two large log rooms connected with a passageway called a dogtrot and an adjoining kitchen; various outhouses stood close by this dwelling. He eventually owned 604 acres all but 17 of which were…