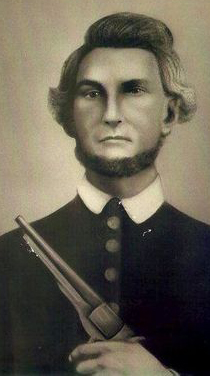 Captain Asa Nelson “Blackhawk” Hays has been referred to as perhaps the most colorful character in Henderson County history. The story goes that he acquired his nickname during the Blackhawk Indian Wars, serving under Abraham Lincoln, who then reached out to his friend in 1861 to help keep the county in the Union.

Blackhawk commanded Company C of the 7th Tennessee U.S. Cavalry, a regiment formed mostly from men of Union sympathy in Henderson and Carroll Counties. One of Blackhawk’s many descendants, Rev. Jerry Lynn Hayes, has been out of Henderson County for many years, but now that he is spending more time near his ancestral home, he is taking time to reconstruct the roster for Company C, as many of the men who served with his ancestor were also relatives and neighbors.

Sharing his interest in Company C and finding that there are still many descendants of Blackhawk’s men in the area then encouraged him to put together a descendant’s reunion. As information on Company C spread, the reunion has gained shape to include…