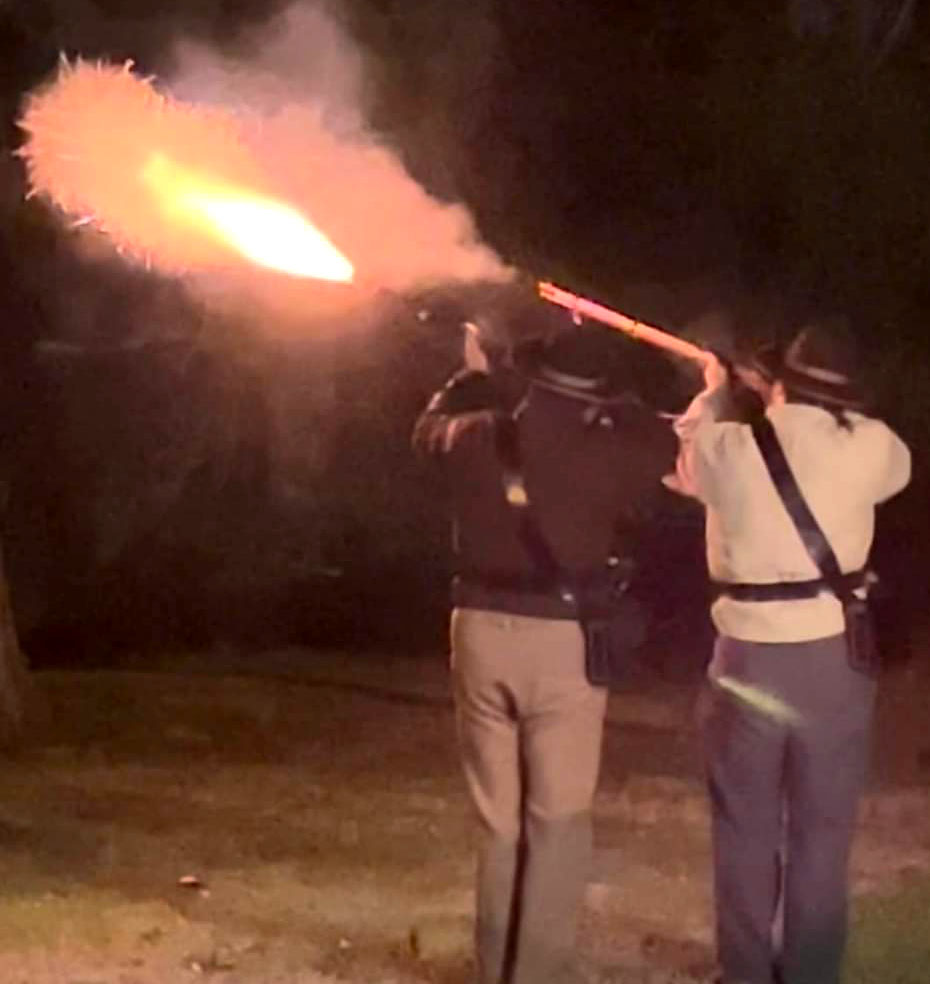 John and Joey Jeter, of the 48th Tennessee Infantry, fired the 21 gun salute during the 159th anniversary event of the Battle of Parkers Crossroads.
Photo Submitted / The Lexington Progress

The Battle of Parkers Crossroads held their 159th anniversary event at the Activities Building, Tour Stop 7, Friday, December 31, 2021. Dr. Clyde Getman, who portrays General George Thomas opened the event with a few words on the general events of December 1862.

The guest speaker was local historian W. Clay Crook, who presented an overview of the battle and information on Col. Alonzo Napier, the highest ranking officer killed during the battle. The presentation was followed by a 21-gun salute by John and Joey Jeter of the 48th TN Infantry, CSA, in memory of the brave men of both armies who met here in 1862.

Forrest’s First West Tennessee Campaign began in December 1862, with the crossing of the Tennessee River at Clifton, and a brief stay above Scotts Hill on the night of December 17, 1862.

The first engagement was at Lexington on December 18th, with subsequent raids taking place all over West Tennessee. Passing south, through McLemoresville, Forrest’s troops camped at Flake’s Store, just northwest of Parkers Crossroads. Running into Federal troops under Cyrus Dunham the next morning at Parkers Crossroads led to a fast and furious fight.

After being surprised by another Federal army from Huntingdon, placing him between two enemy groups, Forrest’s famous “Charge both ways!” allowed for a quick escape. Just shortly before Col. Napier had been killed leading an assault on the Federal line, near Tour Stop 7.

One site poignantly describes an eyewitness account of the assault. “Colonel Cyrus L. Dunham’s Midwesterners, soldiers from Indiana, Illinois, and Ohio, desperately clung to their position for two hours behind a split-rail fence,” it says. “A shell hit the fence near where I stood,” 50th Indiana Infantry Private Joseph Hotz wrote, “and the rail struck me down.” He survived, but many of his comrades did not.

Forrest said this in his official report, “We have, on our side, to deplore the loss of Col. Alonzo Napier of the 10th Tennessee Cavalry, who was killed leading his men in a charge on foot. He was a gallant officer, and after he fell, his command continued to drive the enemy from their…