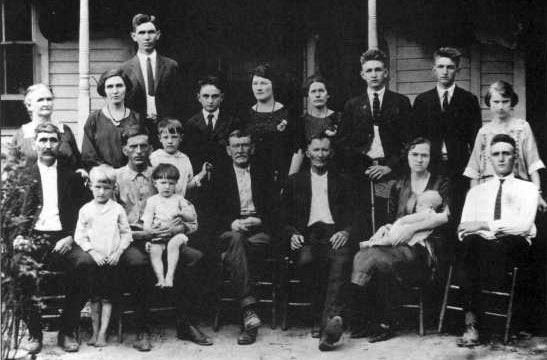 When Wikipedia was still new, I put together an entry for Middlefork, also known as Lizard Lick (the Lick, for short), and then noticed several months later that someone had added its most famous person. Not me, or even my great grandfather, but Randall Wallace. Well, I knew that the famous author of Braveheart and it’s even more famous movie had ties to the area, and that he was related to Gleeman Rhodes, Mark Ward, and Ann Wallace Bailey but it was not until much later that I really found out how close his roots were.  Nearly all of us at the Lick are descended from the Rhodes family. In looking up some material on Jake and Mollie McAdams Rhodes, I came across an eye widening excerpt from Randall Wallace’s biography, “Living the Braveheart Life: Finding the Courage to Follow Your Heart.”

“All I knew of my father’s people was that they came from Lizard Lick, Tennessee. The men in my father’s family were Alton, Elton, Dalton, Lymon, Gleeman, Herman, Thurman (my daddy), and Clyde. They called Clyde “Pete,” and nobody knew why. (I am not making this up.) But they were all on the Rhodes side of the family. The history of the Wallaces that I knew of hit a wall at the death of Jesse, my daddy’s daddy.”

“On a late summer day in the early 1920s, not long after the First World War, a strong young Tennessean named Jesse Wallace was hunting through a woodland near his family’s farm. The forests were thick with pecan trees and oaks. The leaves were lush in mid-July.”

“Jesse carried a shotgun. His new father-in-law, Jake Rhodes, could knock squirrels out of the treetops with a .22 caliber rifle, but few men, even Tennesseans, were that quick and accurate with a light rifle. Jesse preferred the decisiveness, the quick pull and bang of a 12-guage shotgun. He liked strolling the woods, and he enjoyed providing the meat for dinner.”

“He shot easily and calmly and deliberately, never wasting a shot. He had enough squirrels to fill his game bag when he turned for home. He was warm from the hunt and the walk, and he was thirsty too. So a couple of miles from…