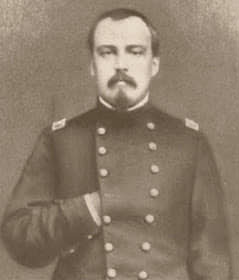 Captain Robert Ingersoll was captured at the Battle of Lexington in 1862.
Photo Submitted / The Lexington Progress

Col. Robert G. Ingersoll was captured at the Battle of Lexington on December 18, 1862, but he was famous before he took command of the Federal troops at Lexington, and long afterwards as the “Great Agnostic.” Ingersoll was an American author, a world renown orator, and a lawyer in his home state of Illinois, serving as the state’s attorney general, and was a noted friend of Walt Whitman. His birthplace is on the National Historic Register.

Ingersoll commanded the 11th Illinois Cavalry at Shiloh, where he met General Lew Wallace, the author of “Ben Hur.” One of the stories associated with the novel, and later a movie with Charlton Heston, was that Ingersoll and Wallace had enjoyed a lively debate, with Ingersoll taking the agnostic position, and Wallace defending Christianity, the grounds of which led to the writing of “Ben Hur.”

Many of the stories found throughout The Lexington Progress about the capture of Ingersoll at the end of the Battle of Lexington were written and documented by the owner and editor of that day, Mr. W. V. Barry. Mr. Barry usually ends the stories with Ingersoll hiding under the old Presbyterian Academy that stood where the house on 44 North Main Street is now located.

However, in the 1930 History of Henderson County by educator Auburn Powers, a different, more favorable account is given.

“It was reported, doubtless by the Confederates, that Colonel Ingersoll was captured under an old woman’s kitchen. It is said that he was discovered because he had…