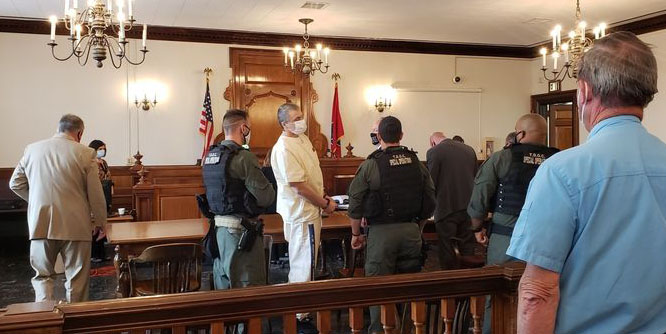 Jason Autry (Middle) stands in handcuffs and shackles after accepting his plea for his involvement in the kidnap, rape, and murder of nursing student Holly Bobo.
Photo Submitted / The Lexington Progress

Burt Staggs has followed the Holly Bobo case over the last nine years, and Monday’s court appearance by Jason Autry finishes the last chapter in his journey. Autry was the last of the defendants in the tragic kidnapping, rape and murder of Holly Bobo, a story that caught the heart of the nation and put locals in West Tennessee into shock. Autry’s testimony during the Zachary Adams trial was three years to the date of Autry’s sentencing. His testimony may have been essential. “It led to Zach Adams being sentenced to life plus 50 years and his brother Dylan Adams entered a plea to 35 years for his part,” Staggs said.

Autry made his appearance before Judge C. Creed McGinley in Savannah around 1:00 p.m., hours later than the intended appointment due to transportation issues. Staggs remained there to sit in on the proceedings and the announcement of the sentence. His post to his social media site was immediate. “Jason Autry was sentenced to eight years, in an agreement with prosecutors for his involvement in the 2011 murder of Decatur County nursing student Holly Bobo.” The plea was for two lesser charges in the original indictment, facilitating especially aggravated kidnapping and solicitation of murder one, with each sentence to run concurrently. Much of that time has already been served, Staggs said. “Autry has served over 2,000 days in pre-trial confinement, which makes him…