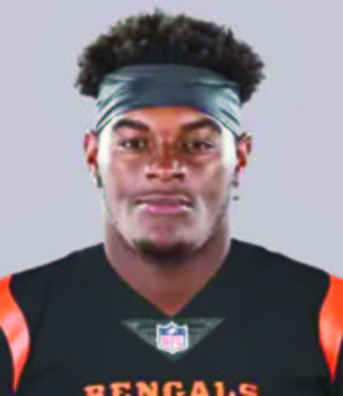 Tariqious Tisdale, a former standout football player for Lexington High School, reflects on his journey that has given him an opportunity to make the 53-man roster of the Cincinnati Bengals football team of the National Football League.
Photo by: bengals.com

As a young kid, many have dreams and aspirations of becoming a professional athlete. One individual from Henderson County is making the best of his opportunities awarded by hard work and discipline to make his dreams become a reality in this world. Tariqious Tisdale, a former youth league football player in Henderson County, and also a previous member of the Lexington High School Tiger football program, has been given the opportunity to make a spot on the roster of the Cincinnati Bengals professional football team. Tisdale played college football for the University of Mississippi and parlayed that into being signed as a free agent by the Bengals.

Now, he has himself in line to be able to make the 53-man roster of the team and make his dream of playing in the National Football League an achievement he has long desired.

While visiting his hometown last week for a few days, I had the chance to catch up with Tisdale and ask questions to him in order to get a feeling of how he thought all his previous moments helped lead him to where he now is currently. He was very gracious in wanting to answer things and in how he respected the media wanting to ask him questions. You will get a glimpse into the mindset of his thoughts that led him from being a young kid playing multiple sports, to an adult trying to make a professional sports league.

We first started off by talking about his youth and asking what sports he played growing up. “Growing up I played football and basketball, I also ran a little track at the high school level,” stated Tisdale.

He knew football was a sport that he could fall in love with and enjoyed playing as a youngster. “From the time I stepped on the football field in the third grade, I fell in love with the game. I actually started watching my brother LaMarcus play before me and it made me want to play even more.”

As he grew older and started into different levels of football, Tisdale reflected on his time playing for Lexington High School and how that prepared him for the collegiate level. Tariqious stated, “Playing under such a great defensive coordinator like Dewond Johnson in high school, I think that really helped me prepare for the next level. If you can take coaching from Coach Johnson, you can…