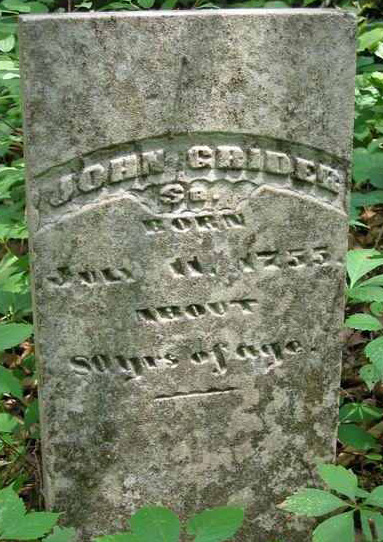 The tombstone of Revolutionary War veteran John Grider, who is buried at the Grider Cemetery in the Laster Community.
Photo Submitted / The Lexington Progress

There are only two dozen or so known Revolutionary War Veterans that have lived in Henderson County. Quite a number of them filed claims here in the 1820’s and 1830’s but left for other places.

Some, like Archibald McCorkle and Joseph Purviance, lived and died in Henderson County, but are buried in Chester County, James King is buried in Hardin County, and Daniel Murphy is buried in Decatur County.

Some are believed to be buried in local cemeteries, but do not have a marker, such as George Anderson at Anderson Cemetery, Athelstan Andrews at Harmon Cemetery, and Zaccheus Wilson at Wilson Cemetery.

Only two of our Revolutionary War Veterans buried here have actual markers: William Lacy, whose original marker was rediscovered at Duke’s Chapel in 2006, and John Grider, buried at the Grider Cemetery in the Laster Community.

John Grider also has the distinction of being both a Revolutionary War Veteran and a War of 1812 Veteran. Grider, who was born on July 11, 1755, entered the service in Burke Co., NC in March 1778, as a private militiaman (volunteer) under Capt. Thomas Whitson, and…