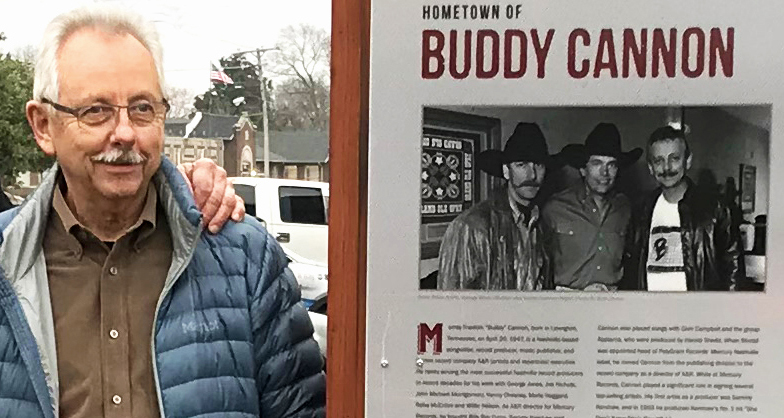 Buddy Cannon, a native of Lexington, Tennessee, recently was nominated for the Nashville Songwriters Hall of Fame.
Photo by: W. Clay Crook / The Lexington Progress

Twelve exemplary tunesmiths are 2021 nominees for the Nashville Songwriters Hall of Fame (NaSHOF) and were announced on June 14, 2021. Among the songwriters nominated was Buddy Cannon. Cannon was born in Lexington, Tennessee. He began his diverse career as a songwriter/singer/musician/publisher/producer/label executive in the early 1970s as bass player in Bob Luman’s band, later making the jump to play in Mel Tillis’ band and write for his publishing company. During their 11 years together, Tillis recorded several of Buddy’s songs, including the chart-topping “I Believe In You.”

Throughout his career, Buddy’s keen song sense has served him well in the studio, helping select and record hit songs for artists ranging from Shania Twain to Kenny Chesney to Willie Nelson, with whom he has written regularly since 2008. Buddy’s credits as a songwriter include “She’s Not Cryin’ Anymore” by Billy Ray Cyrus, “Look At Us” by Craig Morgan, “I’ve Come To Expect It From You” by George Strait, the Vern Gosdin hits “I’m Still Crazy,” “Set ’Em Up Joe” and “Dream Of Me,” as well as the Sammy Kershaw hits “Anywhere But Here” and “If You’re Gonna Walk, I’m Gonna Crawl.” “Give It Away” by George Strait was named the 2007 ACM Song and Single of the Year and the 2007 CMA Song of the Year.

The group will be among those honored at the “50/51” Nashville Songwriters Hall of Fame Gala on Monday, November 1, 2021, at the Music City Center alongside the…

For the complete article, see the June 23rd edition of The Lexington Progress.