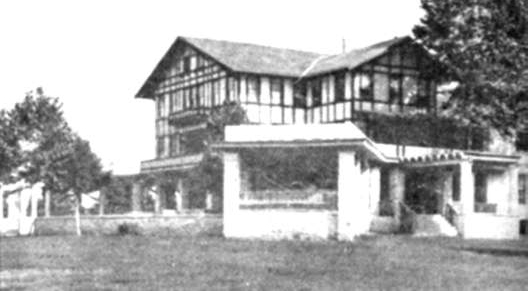 An old photo shows here of the once nationally famous Hinson Springs Resort in Henderson County, Tennessee, before it an accidental fire caused it to burn to the ground.
Photo Submitted / The Lexington Progress

Just as you pass the Beech River Bridge on Highway 200, you might catch a glance to the right of a two-story brick and stone chimney. This, and a few nearby circular stone encasements, are all that remain of the once nationally famous Hinson Springs Resort.

An article from the June 6, 1913, edition of The Lexington Progress, tells of the burning of the hotel, and gives a history of the area:

On Thursday afternoon of last week, May 29th, at 8:00 a.m., or a little after, the handsome hotel structure at Hinson Springs, on the NC&StL Railway, two miles west of Lexington, was accidentally burned to the ground.

The accident came just on the eve of the summer opening and when the newness of the building had scarcely become dimmed.

The cause of the fire was an unavoidable one. The light and water plants of the hotel were run by a gasoline engine. In trying out the engine to see if the light wires and water pipes were in condition, it is thought that the wires must have been crossed in the attic, and that the insulation was disturbed, causing a “kick- back” on the engine, which resulted in an explosion. So rapidly did the fire spread that it was impossible to save the valuable furnishings of the more than seventy-five rooms. The structure was massively built, but the entire house burned to the ground in forty-five minutes.

The location of Hinson Springs is almost as old as the town of Lexington which was founded in the year 1822. The late Mrs. W. O. (Louise) McHaney, who lived passed 80, remembered having visited the spring when she was a young lady.

There was for many years, even before the Civil War, a house on the site, but the first real hotel was erected in 1874 by Joe Hinson, from whom the resort gets its name. That house was burned in 1882. Erection of the next building was begun in 1894, after the building of several…