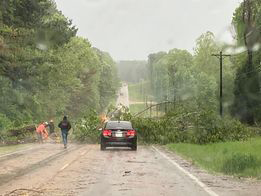 A storm that blew through Henderson County on May 6, 2021 left an estimated 10,000 LES customers without power.
Photo Submitted / The Lexington Progress

On Thursday, May 6, 2021, a fierce storm front, with gusts over 60 mph, swept across Henderson County towards the Tennessee River, leaving 10,000 customers without power and toppling trees that have survived recurring storms from the last year.

By 11:45 p.m. that night, Lexington Electric System, along with teams from some surrounding power companies, had the numbers down to about 4,500, and continuing work overnight reduced the total to about 3,500.

By 3:00 p.m. on Friday, May 7th, the number out of power was down to about 1,100 customers, and the final hundred by 8:00 p.m., but there were still several poles identified that needed to be swapped out.

The Henderson County Sheriff’s Department helped to scout out roads that were blocked for a quick response from the Henderson County Road Department, and several times there were neighbors and community members who responded with chainsaws, tractors, and backhoes to help clear the debris.

The damage was widespread, but fortunately there were no severe injuries. One motorist in the Scotts Hill area saw a pole…