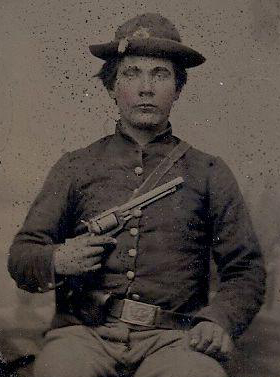 Isaac Davenport was a soldier, who was on board the Sultana when it exploded in 1865.
Photo Submitted / The Lexington Progress

April 27, 1865 was one of the greatest maritime tragedies in the history of the United States, and it took place, not on the sea, but on the Mississippi River just above Memphis. A local soldier, Isaac Davenport, was one of the few survivors, and is buried at the Grandsire Holmes Cemetery in Scotts Hill.

Davenport was a member of the 7th Tennessee Union Cavalry, which was mainly raised from Henderson and Carroll County volunteers. He was captured at Union City in April 1864 and interred at the Prisoner of War Camp at Andersonville, GA.

Having survived the rigors of Andersonville, Davenport was one of the 2,394 men who were being returned home on the riverboat Sultana, a boat only built to hold about 376 passengers. Due to the heavy load, and a problem with the boilers, the ship exploded eight miles above Memphis.

Those not killed outright by the explosion were boiled to death by the steam, cooked by the flames, or drowned in the river. Davenport not only survived but helped to save several other men. The number eventually saved totaled 741. Many of the 1,653 missing were never identified or…