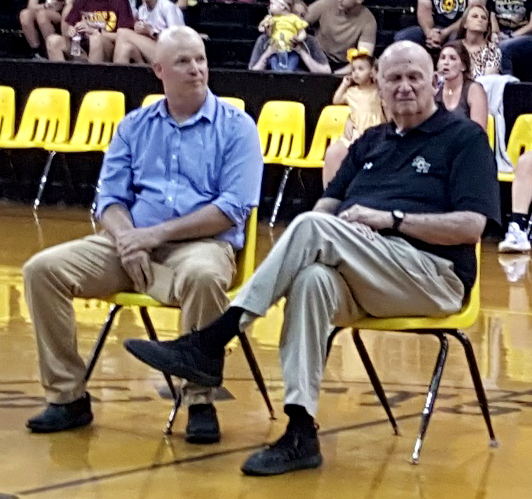 Scotts Hill Elementary has been celebrating 150 years of education in the community with several events. The continuing legacy of two of those special people in the life of the town were honored in a special ceremony at the school gymnasium on Friday evening, April 30, 2021 with its naming as the Hampton Gymnasium.

The honorees were Coach Joe Hampton, who served the school for 35 years, and Eric Hampton, who led Scotts Hill into two recent championships.

The ceremony was conducted between some special alumni basketball games, which brought crowds from all ages into the gym.

The alumni teams brought memories of classmates and days gone by, but the event brought more than just memories. It showed a community and a town still vibrant and a school spirit that beckons more honors in the future.

Scotts Hill Elementary Principal Brian Lane opened the ceremony with an honorarium for Coach Eric Hampton, recounting both his career as a student athlete at Scotts Hill and his outstanding coaching career. Coach Eric Hampton then had the honor of addressing the career of his father, Coach Joe Hampton, who served forty years from 1970 to 2010, and who was also an exceptional student athlete at the school. Hampton said of his father that, “He is one of the most…

For the complete article, see the May 5th edition of The Lexington Progress.