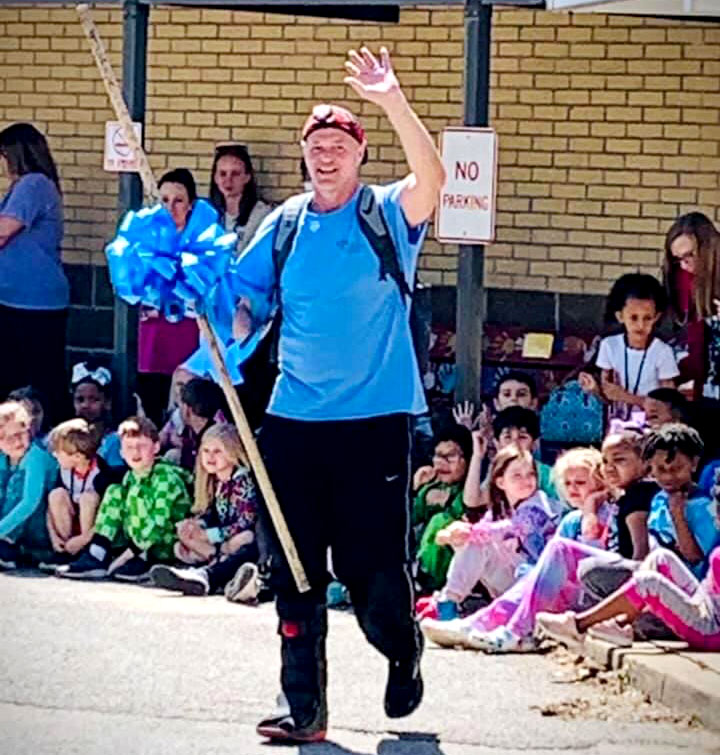 Brantley Smith is on 80-mile walking journey across Henderson County to raise money for the Carl Perkins Center.
Photo Submitted / The Lexington Progress

Brantley Smith walked the extra mile in April for Child Abuse Prevention Month, in fact, he walked a total of eighty miles as he picked out a day to walk to each school, raising awareness and donations for the Carl Perkins Center Dancing with the Stars fundraiser event. Team Smith will feature Brantley and Rilee in Dancing with the Stars, with Ellie serving as their choreographer.

And people noticed him walking the walk and talking the talk against child abuse, cheering him on along the way, and at each site.

Vivian Maness posted on her social media site “Prayers needed for Brantley as he continues his 80-mile journey to raise money for the Carl Perkins Center. I saw him and his team working for tips and donations at Big Cats Pizza Tuesday night running their legs off serving and bussing tables.”

The Henderson County Carl Perkins Center was overjoyed at the campaign. “Brantley Smith is amazing! He starts his journey today to make others aware of the fight against child abuse. April is Child Abuse Prevention awareness month. Brantley has been a light for years helping children and the Center is proud to call Brantley a partner and friend in the fight against Child Abuse! If you see Brantley today give him a shout out and wave. Brantley, you humble us! Thank you for what you have done for children for years and your efforts to raise awareness! We LOVE you!”

He began his walk on April 1, 2021. As a gym coach at his business, West Tennessee Gymnastics and Cheer Academy in Lexington, he was in shape for the journey. He recorded each day’s event on social media- which school, how many miles were involved, and…

For the complete article, see the April 14th edition of The Lexington Progress.