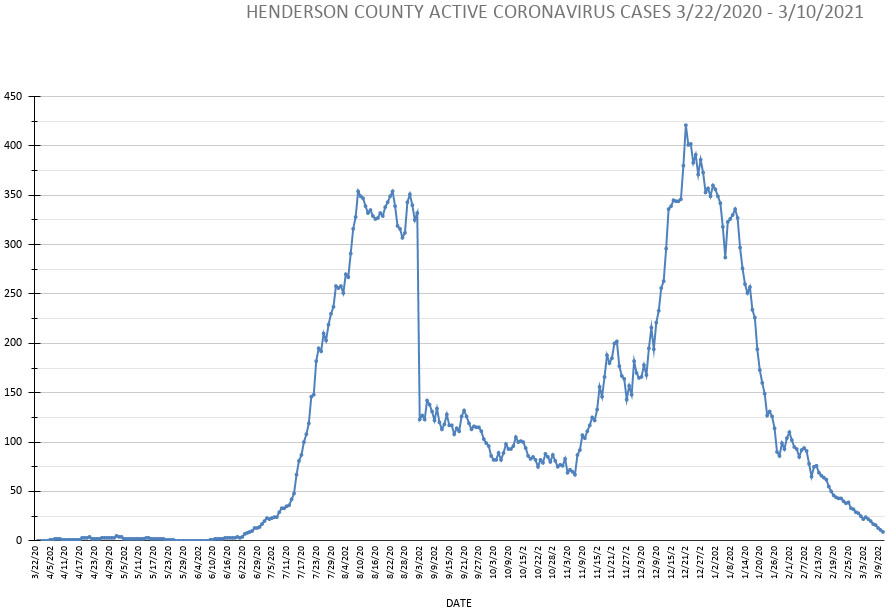 A graph showing the statistics of active COVID-19 cases in the past year for Henderson County.
Photo Submitted / The Lexington Progress

This week in March 2020, COVID-19 made it first appearance on the front page of The Lexington Progress, and although restrictions from the state were beginning to have an effect, there were no cases or deaths in Henderson County at the time. Flatten the Curve became the watch phrase across the state. Henderson County Commissioner Andy Anderson has been providing his constituents with graphs based on data submitted by the Tennessee Department of Health and provided a year in review chart on daily active cases in Henderson County. He also provided some analysis on how the situation developed over the year.

“Although we were all on high alert and changing our behaviors around March 15th or so last year, Henderson County didn’t have an active case until 4/4/20. After that point, the active cases within the county fluctuated between 1 and 5 cases until around Memorial Day (5/25).”

Statistics tell a powerful story, and numbers sometimes had more significance in the way we lived, did business, gathered or worshipped. In April, many congregations chose to start drive-in service, and Governor Lee issued a series of executive orders in May, and asked Tennesseans to stay-at-home. Schools closed early statewide due to COVID-19 concerns, food drives were attended in record numbers, and employee lay-offs started with some businesses. Some 239 people are checked for COVID-19 at a state sponsored drive through testing center at Lexington. Times became desperate for small businesses like beauty salons due to mandated business closures.

By the end of May, graduating seniors had missed out on year end events and wondered about proms, while tickets to attend their graduations were limited to four per family.

The economic impact became significant, and in response to some improvement statewide, restaurants were allowed to phase in re-opening their dining rooms; however, some decided to stick to curbside and drive through service only.

In looking over the data, Anderson said that active cases in Henderson County remained low. “After Memorial Day, we didn’t have any active cases for almost 2 weeks (6/9), and then were still under 5 active cases until 6/23, when active cases really started to spread locally. We hit 10 cases on 6/26, which was the last time we were at, or below 10 cases, until this past week,” he said.

“The increase in late June really accelerated just a week or two after the 4th of July, with our pre-Thanksgiving peak occurring with 354 active local cases on…