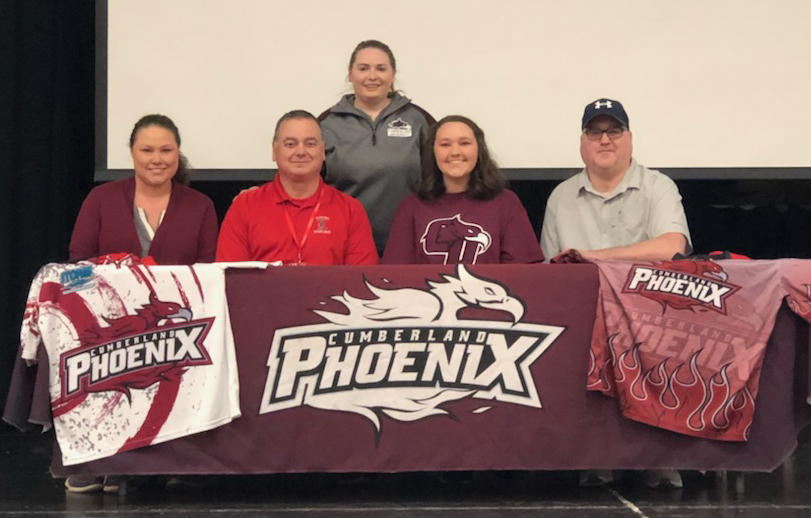 Emily Foster signed her Letter of Intent with Cumberland University on Friday, March 5, 2021. Foster will be a member of the Phoenix bowling team.
Photo by: Blake Franklin / The Lexington Progress

A dream came true for an LHS student athlete on Friday, March 5, 2021. Emily Foster, who was on the LHS Bowling team this past season, had a big day as she was surrounded by family, friends, and teammates in the auditorium at Lexington High School. Foster was there to sign her letter of intent with Cumberland University. Emily had received an academic scholarship, along with her athletic scholarship to become a part of the Phoenix family.

Cumberland University is located in Lebanon, Tennessee, just some 23-miles from Nashville. The Cumberland Phoenix are part of the Mid-South Conference. The women’s bowling team is coached by Christina Hollis. Emily was the first official bowling recruit to sign with Cumberland in the 2021-2022 class. “Coach Nathan opened my eyes to becoming a student athlete at the college level. He really did”, stated Foster when asked what led her to Cumberland University. Emily went on to say, “We started looking around and found it. It just happened.”

Foster mentioned that Coach Nathan Reeves meant a lot to her family. You could tell by the interactions between the coach and her entire family that was the case. They were one big family altogether. Emily stated, “I owe him a lot in getting me to this point in my bowling career. I was planning on going to college after high school but without his help I am not sure that I would have become a student athlete.”

A love for bowling had always been with Emily and she couldn’t be any more excited to fulfill a dream of hers. “I am just really glad all this happened, it’s like a dream come true today”, said Foster.

Emily Foster was named to the All-Region team, as well as the All-Region Tournament team. She averaged 182 and won most of her matches. Emily also earned the Girl’s MVP award. “Emily is the epitome of what a student athlete should be. She has zero discipline issues, a GPA of 4.0, and she scored a 30 on her ACT”, stated Reeves. She has made LHS very proud. Emily helped the team to a second-place regular season finish and the highest win total that the girls have had in years. “The day I met Emily I was committed to helping her bowl beyond high school. As a matter of fact, my number one goal for every bowler is to…

For complete coverage, see the March 10th edition of The Lexington Progress.