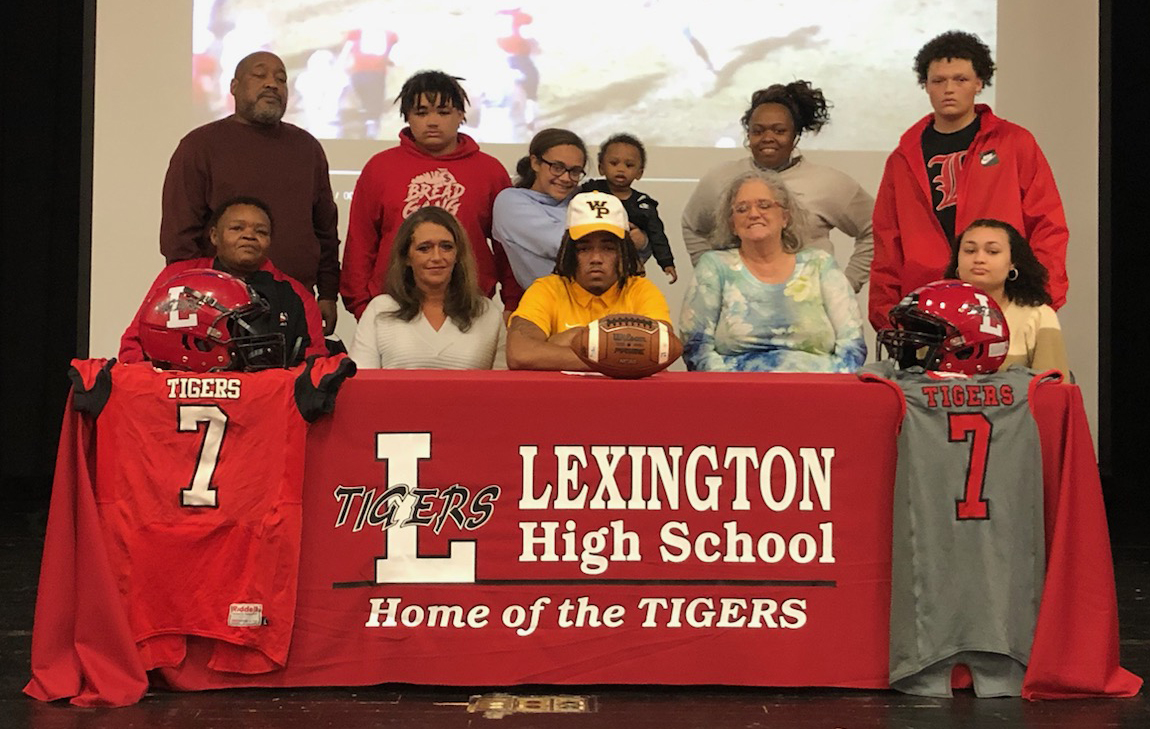 In what is becoming a common theme for the Lexington High School football team, another member of the Big Red Tigers has signed his Letter of Intent to continue his football career with William Penn University, in Oskaloosa, Iowa. Cameron James was surrounded by his family, with friends, teammates, and coaches, on Friday, February 26, 2021 in the Lexington High School auditorium as he put the ink to the paper and signed on to play football for the Statesmen.

In opening the ceremony for Cameron, head coach of the Lexington High School football team, Bryant Hollingsworth, shared his thoughts and feelings about what Cameron has meant to the football program. Bryant stated, “Tiger Nation is so proud of Cameron and everything he has accomplished. He is a very hard worker and demands the same work ethic from everyone around him. He will do great things.”

Bryant would speak very highly of Cameron’s football IQ on the field and even as he watched film. He was impressed by his player in knowing how to line up the defense and getting other players in the correct position. The head coach also praised him on his work ethic and how Cameron brought out the best in others abilities on the field.

Hollingsworth said, “Cameron was always there for the 7:00 a.m. workouts in the summer and wouldn’t bat an eye at them. He would go do his homework, by watching film, when he was away from the facilities and be prepared for the next day when he returned.” You don’t see the likes of Cameron’s desire to want to be the best all around player that he can possibly be year in and year out. It takes a special kind of kid to want to do that, and his coaches saw that in him. “We pushed him to be the best because we saw just what he was capable of. Today, you all see the hard work that Cameron put in and what we saw in him out on the practice field. All of that paid off as he signed on with William Penn.” The coach wished him well and told Cameron that he would be missed, but to go do big things and keep the fire lit with his desire to be the best he could be. He ended with. “William Penn is getting one heck of a football player and person, all at the same time.”

In coming to the stage, Dewond Johnson shared a few words about Cameron also. Johnson was also impressed with the work ethic that he put into the program to become a better player. He thanked him for showing the younger guys just what it takes to become the player that Cameron is. “If you want to be on this stage and sign on to play college football, then you…