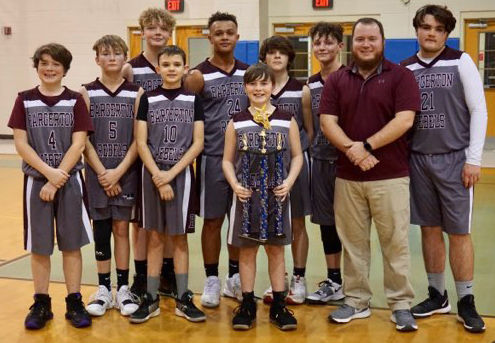 The Bargerton Rebels entered the varsity boy’s County Tournament as the 3rd seed, with a 7-5 record in county play and 10-5 overall. In the first round of the tournament, they were matched up with the 6th seeded South Side Mustangs. It was only a one-point game at half time, but the Rebels pulled away for a 37-18 victory. In the second round, Bargerton was matched up with 2nd seeded Pin Oak, who had beaten them both times earlier in the season. The Rebels were ready this time, however, delivering a blowout win, 56-27, over the Eagles. Jakob Davis was the leading scorer with 27 points. Ryder Davis added another 20 points, including four 3-pointers, and Sam Ray had 8 points.

The huge win advanced Bargerton to the championship game for the first time in five years. The 3rd seeded Rebels were matched up with the 5th seeded Westover Bears. Bargerton had beaten Westover the previous two times during the season. The Rebels were able to take care of business, once again, for a 31-15 victory and their first championship since…