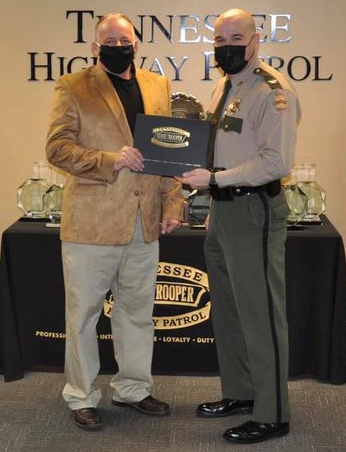 The Tennessee Highway Patrol announced the retirement of Lt. John Paul Dunaway on January 15, 2021, after 35 years of dedicated service. “Today was John’s last day, his daily influence will be missed. Thank you for your service to the state of Tennessee and the THP Jackson District. All the best and congratulations,” said Colonel Matt Perry. “Lieutenant John P. Dunaway was commissioned in 1986 as a Trooper. During his career, Lt. Dunaway has been stationed in Hickman, Madison, and Henderson Counties.”

“In 1989, he joined the Criminal Investigation Division. He worked narcotics with CID for two years before becoming a Special Agent in the division. Lt. Dunaway was then promoted to Sergeant and assigned to Henderson County in 1999, serving as a crash reconstructionist.” On January 11, 2008, he received his promotion to Lieutenant in a ceremony in Nashville, Tennessee by Colonel Mike Walker and the THP Command.

Lt. Dunaway, who resides with his family in Wildersville, is a native of Henderson County and a 1979 graduate of Lexington High School. He joined the police department when he was 21 and then started with THP when he was 24, Dunaway said in a recent interview with The Lexington Progress. He also carried on a family tradition by joining the THP. His father, John Robert Dunaway, served