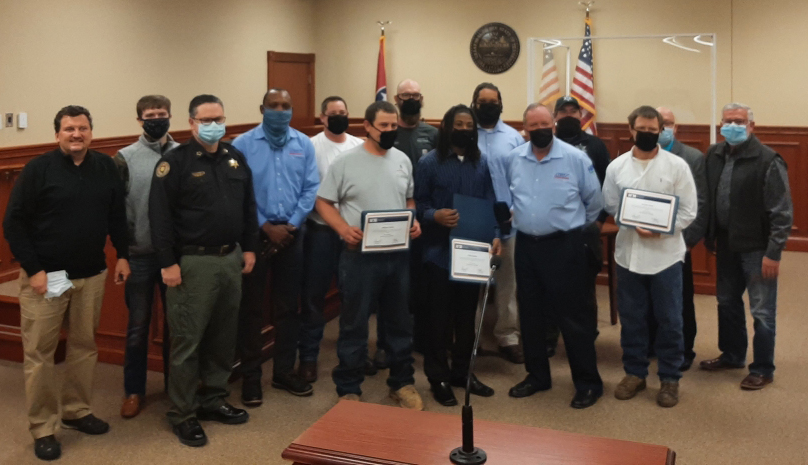 The graduation of the first inmate construction class in the State of Tennessee was held at Henderson County Criminal Justice Center on January 22, 2021.
Photo by: W. Clay Crook / The Lexington Progress

Don Glays, President of the Tennessee Builders Education Foundation, said that the idea went back to 2018 when the Tennessee Home Builders were asked to construct some houses in Tennessee and local builders identified a need for skilled labor. “Joe T. Wood stepped up with a need from the Henderson County Jail for a program that would provide meaningful careers for inmates, and the program was born.”

Henderson County Sheriff Brian Duke said that, “We are honored to be the first county jail in the State of Tennessee to enter into a partnership with all of these organizations, and now we have the first graduating class. Having grown up in the building business, I understand the particular needs of this program, and how much of a commitment was needed to complete it. Now we have the first graduating class,” he said turning to the group, “and we are proud of that milestone, and we are proud of them.”

Sheriff Duke and other speakers commended the instructor for the program, Chris McPeake, Jim Terry as a local sponsor, and Charlotte Perry who served as a liaison between the Henderson County Criminal Justice Center and the program, along with Jail Administrator Captain Jeff Smith.

Graduates Michael Mayer, Phillip Bailey, Donnie Davis, Jesse Fuller, Willie Smith, and Quadras Buckley were present, while Jacob Woods was already at his work release station. “Thank you for taking this opportunity,” said Sheriff Duke as he continued to address the graduates. “The choices you make now…

Local Group Raises Funds to Help Our Unseen, the Homeless