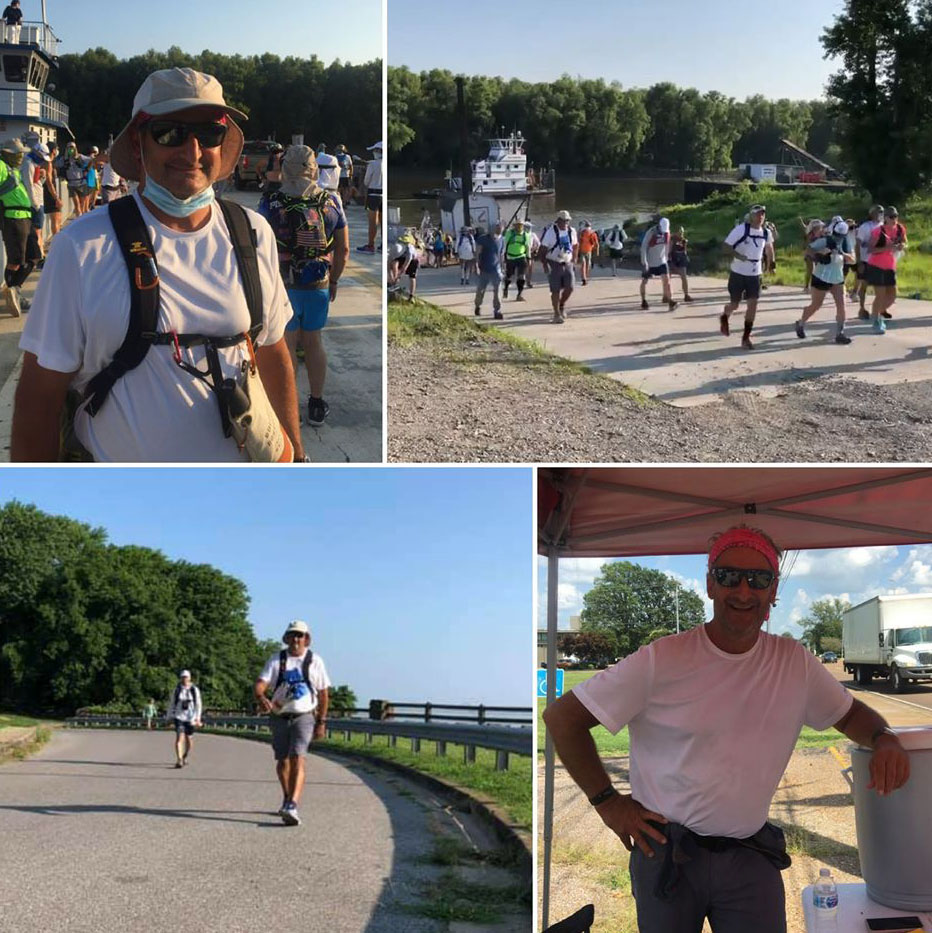 It’s dark, the road is rough and pitted and too narrow for his crew to follow. The toe of one sneaker has been cut out to relieve a swelling blister, and a small toe has blistered to the bone. Checking them isn’t an option, he is racing against a clock called Oprah, and with a still fresh knee replacement it just takes too much time. He has his shuffle going- the slap of his sneakers and the little rattle of his pack counts cadence in his head with a “boom shaka shaka, boom shaka shaka” and he can’t break the pace.

By his calculations there must be only a little further to go, but the line is still hidden from view, there is just the road, the wood line, his shuffle…and the pain. “It never really goes away, it just mounts, but I’m not giving in,” Steve Meyer says to himself.

He has made over 312 miles of the 314 test of endurance, and maybe even faith, called the Last Annual Vol State Road Race. “Then I broke out of the woods, and they were there, my team, my family!” He looks at me and winks, “And what do you get?” With a shy smile he digs into his canvas pack, a worn American flag on the pouch, and pulls out a wooden medallion. He handles it like gold, and maybe it is, because it cost him 314 miles in ten days to get it.
He’s had twelve and a half hours of sleep during the journey, and sometimes dug through the garbage to find a bit of water. With the COVID-19 travel restrictions, only 66 contestants out of a possible 120 were able to attend, and he’s seen many of them drop away or be beaten by Oprah. “She’s always on your heels, you have to beat the average of 31.4 miles a day or give up rest time to stay ahead of her.” If you fall behind her, fall behind the calculations, “then you get a call that you are out. If you walk, they won’t track you; if you don’t check in, they won’t look for you, it’s done.”

He has one shocking encounter with the clock that pushed him forward. “My strength and my hope were diminishing, probably my weakest point in the race, but I made it to a BP station and had a little time left before I needed to check in. I nodded for just a bit, said a prayer, then hobbled up the steps to get a Red Bull, and then I checked in, Oprah was right there with me! No! I swear bells went off in my head, No!” It was like Popeye eating his spinach, Meyer said raising his arm and making a muscle, “and even though I didn’t know it, I think I felt all the support flow in from everyone.”

His daughter, Megan Stovall, said that the number of people following on Facebook just kept growing, “it grew until it drove out the drama of everything around us, the news, COVID-19, everything out of our minds,” she said. “Much of it was dad’s positive attitude, it kept going and he kept going and even others in the race and their crews noticed it.” She looks down for just a bit, a hitch in her voice when she looks up, remembering the…