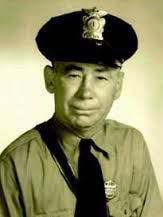 Officer Arthur Gurley was killed in the line of duty on August 6, 1954.
Photo Submitted / The Lexington Progress

On August 6, 1954, Officer Arthur Gurley, of the Lexington Police Department, was killed in line of duty on the grounds of the Henderson County Courthouse stemming from an election day dispute. It was reported as “a blazing gun battle” in some of the newspapers at the time. Police Chief Clovis Stanfill was also critically wounded. The incident occurred on the east end of the courthouse, opposite of what is now Community Bank.

Officer Gurley had been working overtime due to the election night. Chief Stanfill, Officer Gurley and another officer, Isom McPeake had approached one of the candidates to serve a warrant for being armed. One source said that Gurley had died on the spot, perhaps around 9:00 p.m. Officer Gurley was recently remembered on the Lexington Police Department’s social media site, and other sites that recognize the “end of watch” for police officers around the nation. He is also memorialized on a plaque of fallen first responders at the…