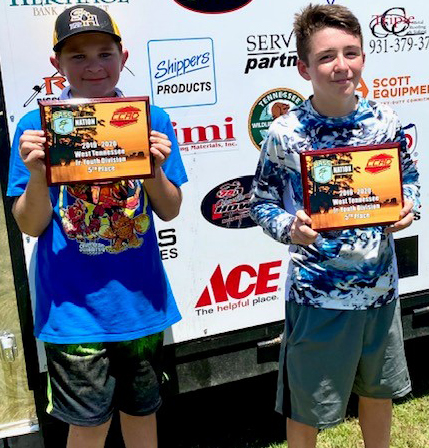 The team of Kaleb Winstead and Dalton Sheedy finished in 5th place in the points race at the West Tennessee Regional Bassmaster Championship.
Photo Submitted / The Lexington Progress

The weather was hot and so was the competition in the West Tennessee Regional Bassmaster Championship that was held on Pickwick Lake this past Saturday, June 6, 2020. It was the end of the 2019-2020 regular season championship for both high school and junior teams.

The Junior Team of Carson Cooper and Chase Stubblefield not only finished in third place in the Championship tournament, they managed to win the West TN Junior Points Championship. They had been in contention for the points race all year but were never in first place. Their regular captain, Toby Stubblefield, was out of town but was going to try captain for them. My granddaughter, Bracyn Sullivan, had already qualified for the National Championship so she wanted to sit this one out, so I could captain for these guys knowing how close the points race was. Also, the team of Kaleb Winstead and Dalton Sheedy finished in 7th place in the tournament and…