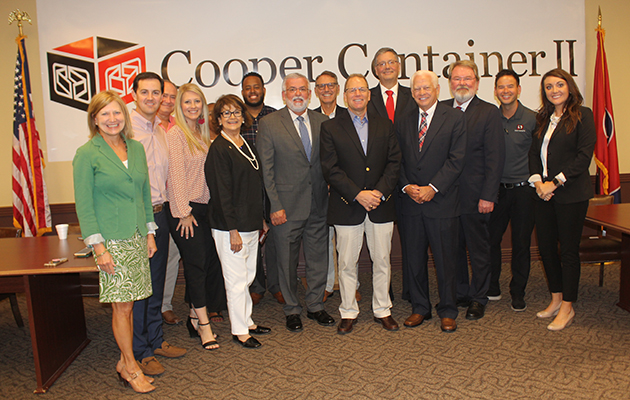 Tuesday, August 9 – Tennessee Department of Economic and Community Development Commissioner Bob Rolfe and Cooper Container II and Welch Packaging officials announced the company will make a significant investment to expand its operations in Henderson County. The corrugated packaging producer and foam converting company will create approximately 40 jobs in Lexington over the next 3 years.“We are most grateful that Cooper Container II has made the decision to expand its operations in Henderson County,” Rolfe said. “In 2018 alone, TNECD has supported more than 2,000 new jobs in West Tennessee and the new job commitments by Cooper Container II extends this momentum moving forward.”

Cooper Container Corporation II was founded in 1997 by A.C. Cooper with the acquisition of Kirby Containers. In early 2018, Cooper Container II joined the Welch Packaging family of companies. Headquartered in Elkhart, Ind., Welch Packaging has 12 regional manufacturing locations, four distribution centers in seven states throughout the Midwest, and more than 1,000 employees.

“Welch Packaging remains dedicated to servicing the needs of local customers with custom corrugated boxes and packaging solutions,” Welch Packaging CEO Scott Welch said. “The company has a commitment to cost effective packaging and long-term customer relationships. Welch Packaging, since its inception in 1985, has continued to live its vision. Now, more than ever, Welch Packaging strives to make a difference in its customers’ businesses, their associates’ lives, and the communities where they work and live.”

“We see incredible opportunities in the Tennessee market and we needed to add additional capacity to our group,” Welch said. “The City of Lexington officials and State of Tennessee have helped make our decision to expand in West Tennessee easy. We are thrilled with the availability and quality of associates in the Lexington area who can join our team. We look forward to completing the building addition in late 2018 and continue to add capacity and jobs at Cooper Container II for several years to come.”

For this and other interesting stories, see the August 15th edition of The Lexington Progress.