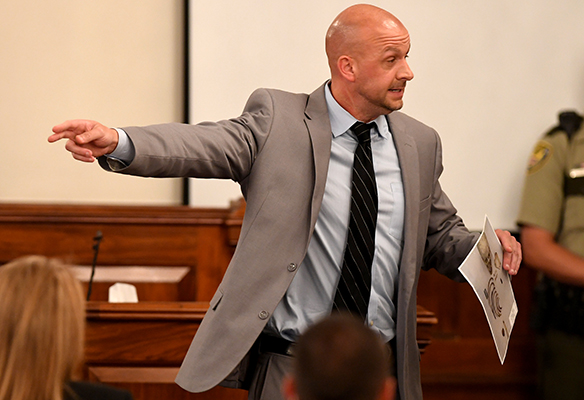 “Six years, and we have been here two weeks,” Paul Hagerman started with his summation to the jury.  “This is not the first time that Ms. Karen Bobo has been in the same room with the man who killed her daughter.”  Pausing briefly, Hagerman placed one hand in his pocket, lowered his head a bit, and looking up saying, “On April 13, 2011, Austin took her through the woods, kept her, raped her in a barn, and then Jason and Zach took her to the river under the bridge.  We stand in the place under the bridge, there is water, there are rocks, there are cars crossing the Tennessee river.  As they cross, cross, cross, you can’t see below to this place at all.  When you stand in that place, you are all alone…but she wasn’t all alone,” he said, “she laid there in a blanket, and she wasn’t all alone, because two men, two bad men, stood there with her, one at her head and one at her feet…there was a shot that echoed under the bridge.  Those two men chose what they chose to do in secret.”

“The secret of the shot under the bridge bonded together these two men, indeed these four men,” he went on to say.  The secret wasn’t kept very good, even the first two weeks, with Holly’s papers, he explained, and other items, being found within days of the Austin residence.  Hagerman said that Adams had no alibi at all, except for the men with which he had committed the crime. “He is trying to get guns, fighting his grandfather, acting crazy,” Hagerman hammers, “the secret is already cracking, falling apart!”  Hagerman pointed, in his summation, to a failed investigation by Dicus, claiming that it could have been resolved in weeks “if he had listened.”  He then listed the witnesses that the prosecution had called, “They could have listened to person after person who had heard him, and this already cracked secret, could have been done…finally, the people around Dylan Adams comes forward, and finally someone listens…the same names they had heard from the beginning, Dylan Adams, Zachary Adams, Shayne Austin, Jason Autry.  The secret has been kept by all but one man, Jason Autry.”

Both hands are in Hagerman’s pockets now, his coat tails cascaded behind him, and a serious frown on his face, “Holly Bobo never had a chance.”  Autry, he says, is as guilty as all the rest, in for the whole thing when he agreed to help bury the body,” and Hagerman then illustrates the moment at the bridge, with his hands in the air on an imaginary blanket, “Holly still alive.”  And Autry’s testimony, he explains, is supported time after time during the trial.

Thompson briefly objects during the prosecution’s summation, and Judge McGinley directs Hagerman to stay within the facts.  Comments on social media, however, are for Hagerman, “This guy is good!” one writes.  There are twelve in the jury box who will make the final decision, but there are thousands of others, a great choir expectant of their peers, who have already made decisions in their hearts.

Hagerman then begins to hammer at what he outlines as the pointlessness of many of the witnesses for the defense, and then he said, “Don’t tell me that, don’t tell me that!” he empathized, as if a member of the jury, “Just tell me the facts about this case.”  He goes back to one of the jail witnesses, who related that Adams said in March 2014, “They’ve got no body, they’ve got no gun.”  And he was right, Hagerman said.  They had no body until September 2014.  No one, the prosecutor says, knew about a gun until the skull was found in September how Holly died, “No one but two men,” Hagerman points out.  He ends at 10:49 p.m.  His summation was roughly forty-five minutes: in brief, Austin kidnapped her, they all raped her, and Zachary Adams and Jason Autry killed her.

A little after 11:00 a.m. Jennifer Thompson approached the jury. She momentarily steps back and forth, and she raises her hands. “Zachary Rye Adams is one hundred percent innocent of the charges presented today.  All the non-evidence in the case is just exactly that, non-evidence, think about all the non-evidence.”  Thompson began and she outlined that all the evidence that had no bearing on the case by the prosecution, including the pair of pink underwear that did not belong to Holly Bobo, a man mowing a yard, cell phone location evidence, a shoe print in the carport belonging to Clint Bobo, “a way to rouse suspicion,” she says is not evidence.  A palm print that might belong to Terry Britt, a mattress at Zachary Adams’ house, camouflage clothing, a black truck, scratches on Zach Adams, all evidence she says that was no evidence, but a maneuver by the prosecution to raise suspicion because they have no evidence connecting Zach Adams to the crime.  Contradictory evidence, Autry’s testimony that doesn’t implicate Autry, and then Autry returns and finds out the rest of the story, but none of it is hard evidence, Thompson says, that actually connects Zachary to Holly.  The motive?  “To cook meth with Clint Bobo?”  Thompson’s eyes are expressive, as if to say “Really?”   She runs through the history of the gun, “End of story,” she said pointedly.

“Now it is time to listen to the rest of the story, and when you listen to the rest of the story, then the government’s story is full of holes…what the government cannot explain, then that is what Dylan and Shayne did.”  Her delivery is exacting.  Some have complained before about Thompson’s broken delivery, but like a rapid-fire marksman, she tears into her targets without hesitation.  She goes back over Clint Bobo’s description of the man with long dark hair down to his collar, heavy.  That doesn’t describe Shayne, it doesn’t describe Zach, it doesn’t describe Dylan she says expressively, and she remarks that Clint recognizing Terry Britt’s voice as eighty percent sure.  “You heard Zach’s voice the other day, it is high, he doesn’t have the low, gravelly smoker’s voice,” she said.  She refutes the cell phone tower testimony, she refutes the truck in question, as Zach’s truck is a mid-sized white truck, not full size, and Barnes did not see it after the scream, “It’s not evidence in this case,” said Thompson.

“All we have is this tall tale by Jason Autry,” she continued.  She says he has two death sentence attorneys, and advice from them, “…and Jason Autry is able to sell his death sentence to the government for a tall tale.” Thompson looks at the jury and says, “He comes across as a good ole boy, just trying to do the right thing, and now I have come to tell the truth, but he is no shrinking violet.  If you have watched him, he absolutely had control of the courtroom.”  His controlling personality will be important to the rest of the summation she says. “He is able to combine his story with a little truth, the best lies have a little truth in them.”  They were drug buddies, “and he is able to weave so many little things into his story.”

“When Jason develops his story, he has access to the government’s discovery evidence.”  If you remember what you did that day and you have the evidence and “mix it in with a little bit of truth,” then she basically says that you have the story as presented by Jason Autry.   “Jason Autry was very well coached when he gave his story. He used the word allegedly three times during his testimony,” indicating that that this was not a normal part of his normal speech patterns.  She re-played his testimony to the jury to emphasize this. “You use allegedly if you are not sure what happens…it’s a word that law enforcement uses, not a witness.”

Thompson also said that after Dicus was replaced from the case that the TBI was under pressure to make an arrest in the case, tremendous pressure.  On the exhibit concerning the gun shot area, she pointed out that the hole was matched closer to the .380 round that was found there rather than the .32 caliber gun in evidence.  She also mentioned that the gun was found in the creek, for five and a half years, with no silt or mud on the top of it. “That’s not believable, and there is a big reward in this case,” Thompson said as she moved her head from the slide projected on the wall to the jury.  Her shoulders slightly rise, as if in disbelief.

On the telling statement by the prosecution, Thompson countered, “There is no evidence that ‘no body, no gun’ was said prior to the finding of the other evidence.”  She proceeded to outline how Terry Britt could have committed the abduction, walking through the steps using the state’s evidentiary premises. “The people who have their alibis readymade, those are the suspicious ones.”  In the end she says, “It was the governments job to fill in the holes to make the story, they have miserably failed.  It is probably Terry Britt who is the real suspect in this case.”

“In this case, unlike so many others, there are multiple instances of reasonable doubt.  This is a very serious matter, she said, and “making stupid comments doesn’t make him a murderer.”  The judge recessed the court until 2:00 p.m.

For this and other updates, see the September 27th edition of The Lexington Progress.