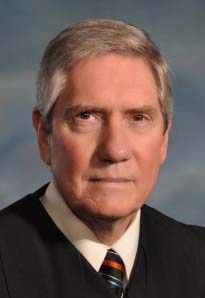 Chancellor James Butler is set to retire in June 2021, after 19 years of service to the community.
Photo Submitted / The Lexington Progress

Chancellor James F. Butler, who has presided over the Chancery Courts of Henderson, Chester, and Madison County since 2003, is retiring in June after 19 years of service to the community.

Chancellor Butler received his undergraduate degree from Lambuth University in 1964, and his J.D. degree from the University of Tennessee in 1966. He practiced privately from 1967 until 2003 when he was elected to the bench of Tennessee’s Twenty-Sixth District Chancery Court.

He has also served with the Judge Advocate Generals Corps and retired as a Colonel after 28 years with the Tennessee National Guard. He is the twice recipient of the Pro Bono Award in 1993 and 2000, which is presented by West TN Legal Services Corporation; a recipient of…