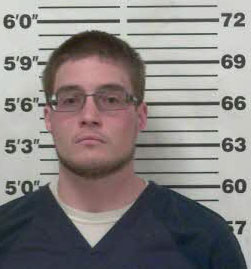 Johnny Wayne Bass Jr. has been charged with one count of Attempted First – Degree Murder, Reckless Endangerment with a Weapon and Employing a Firearm During the Commission of a Dangerous Felony.
Photo Submitted / The Lexington Progress

Captain Jeff Middleton, of the Lexington Police Department, has provided a release on the suspect involved in a shooting at Montgomery Courts in Lexington on Monday, January 11, 2021.

“On Monday, January 11, 2021, at approximately 9:55 am, Lexington Police Officers responded to a report of shots fired in the area of 118 Montgomery Courts in Lexington.”

“Upon arrival, officers found a victim shot in head/face. The victim in this case was transported by EMS to Jackson General Hospital by Henderson County EMS. The condition of the victim at this time is listed as critical.”

“The subsequent investigation into this incident determined that the victim and her husband became involved in a dispute that escalated into the male party shooting the victim.”

Mr. Johnny Wayne Bass Jr. was taken into custody upon returning to the scene shortly after the officers arrived. Mr. Bass has been charged with attempted first – degree murder, reckless endangerment with a weapon and employing a firearm during the commission of a dangerous Felony.”

For this and other interesting articles, see the January 13th edition of The Lexington Progress.