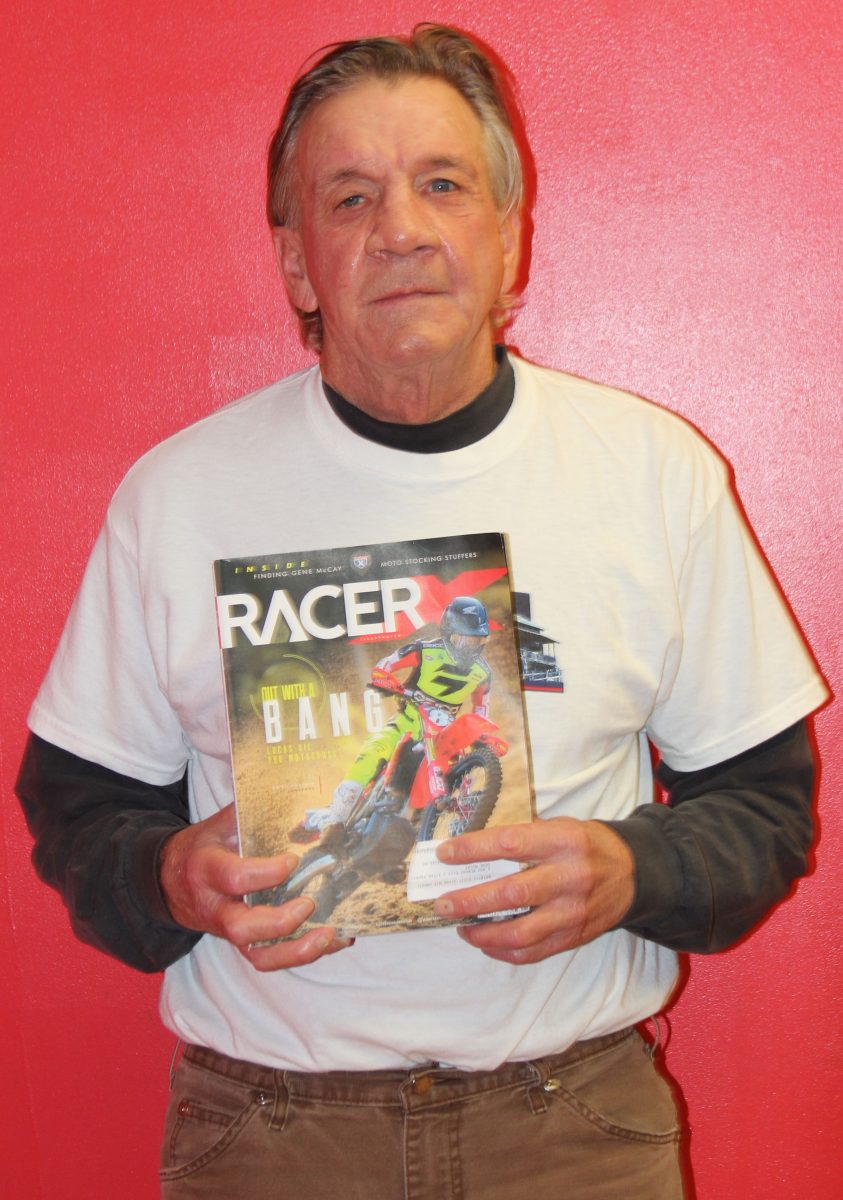 Gene McCay pictured holding a copy of the recent Racer X magazine that published an article on him about his younger racing days.
Photo Submitted / The Lexington Progress

Article by Blake Franklin with assistance from McArthur Lewis

On an afternoon this past August 2020, an older looking gentleman accompanied by a friend showed up at the Loretta Lynn Ranch near Camden, TN. He and the friend went there to see the first AMA Pro Motocross race ever held at the famous country music singer’s home. The Monster Energy AMA Amateur National Motocross Championship is held annually at the ranch and is known as the world’s largest amateur motocross race. It is the final stop for amateurs before they join the professional ranks. The gentleman, now age 60, brought with him a tattered old brown Samsonite suitcase filled with press clippings, event programs, posters, pictures, and race results to help illustrate his brief days as a motocross racer in his younger. The gentleman’s name was Gene McCay.

He had been invited to the event by one of the organizers, Dave Coombs, who happened to also run the biggest motocross magazine in the world, Racer X Illustrated. Dave Coombs had remembered well Gene McCay as being one of the best known and cerebrated mini-cycle motocross racers during his youth years of the 1970s, but for the last 40s years, Gene had disappeared from the motocross racing scene and his whereabouts not known by the established racing world.

Coombs and he talked, took his suitcase full of old racing materials and will subsequently publish an article in his January 2021 issue of Racer X magazine. The article, which covers several pages with numerous photos, is titled “Finding Gene McCay.” Coombs article conveys that other than what Gene could still recall, the suitcase contained all that was left from one of the most celebrated and mysterious careers in minicycle racing. The suitcase had been saved by a friend of Gene’s who happened to have it when Gene lost most everything, he had in a flood several years ago.

Coombs describes himself as a lifelong motocross enthusiast and had long known the name Gene McCay. Quoting Coombs “He was our sport’s version of a playground legend, known to beat some of the best blue-chip prospects in the game, only to disappear before he ever made it big. As a kid, he won several early AMA and NMA Minicycle Championships, which led my brother and me to…