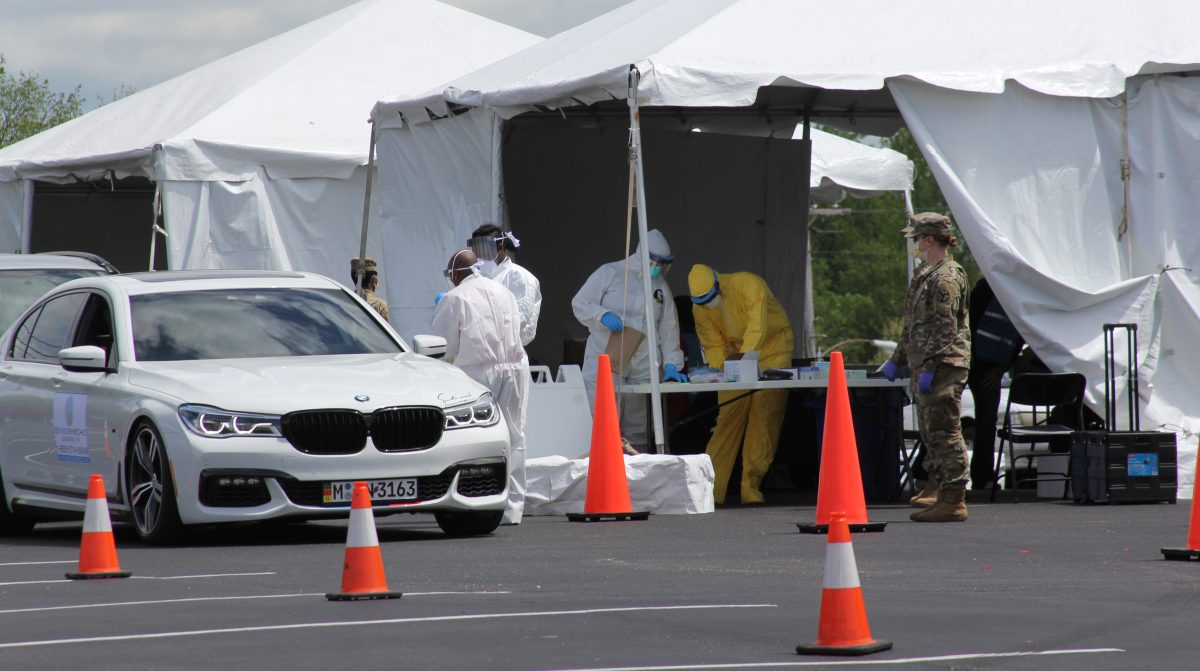 Individuals get tested for COVID-19 in their vehicles at the First UNited Methodist Church – Lexington on Sunday, April 26, 2020.
Photo by: W. Clay Crook / The Lexington Progress

Officials in full Hazmat gear approached the line of cars on either side of two large medical tents. Before reaching the two tents, where Tennessee Department of Health personnel were set up for COVID-19 testing, members of the Tennessee National Guard wearing prescribed masks, stepped up to hand questionnaires to each of the vehicles in line.

Members of the Lexington Policed Department blocked off portions of Wilson Street, with traffic directed at each intersection on Monroe Street, starting near First Street, to move north and then cross East Church Street to the First Methodist Church area. Turning right on Wilson Street, the cars were then directed into two lines to move to the tented testing areas.

For many people, the scene with officials in Hazmat gear was only familiar from science fiction movies or a Stephen King book, but the free drive through COVID-19 testing event at the First United Methodist Church parking lot was a stark reality.

Those being tested remained in their vehicles during the entire time, many wearing protective masks, the lines moving fairly quickly as the nasal swabs were applied to test for the coronavirus. Those tested were asked to self-quarantine one to three days until the test results were back.

According to a Monday, April 27, 2020 Governor’s bulletin more than 7,000 Tennesseans received free COVID-19 tests, regardless of symptoms, during Unified-Command Group’s second weekend of expanded testing efforts at 18 sites across the state.

“We expanded testing availability to any Tennessean who believes they need a test because testing remains one of our most important tools in tracking and mitigating the spread of COVID-19,” said Gov. Lee. “We’re grateful to the thousands of Tennesseans who came out to get tested, and we’re incredibly thankful for the efforts of our Department of Health and National Guard personnel for making these testing sites a reality.”

Tennessee Department of Health and Tennessee National Guard personnel tested 4,247 individuals on Saturday at 10 sites across all three grand divisions. Two metropolitan areas, Hamilton and Shelby counties, were added from the previous weekend with…

For the complete story, see the April 29th edition of The Lexington Progress.