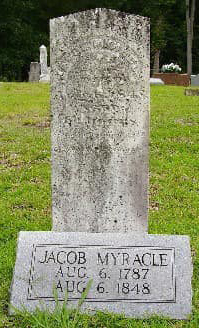 A tombstone for Jacob Myracle is shown at Duke Cemetery, in Henderson County, Tennessee.
Photo Submitted / The Lexington Progress

We often think of our ancestors who were Revolutionary War veterans and our ancestors in the American Civil War, but our county was named for an officer who was killed in the skirmishing leading up to the Battle of New Orleans.  The battle occurred on January 8, 1815, gave a final ending to the War of 1812 and made General Andrew Jackson nationally famous. The war was officially ended some weeks earlier by the Treaty of Ghent, but the British presence in Louisiana still posed a threat, and Jackson’s defense of New Orleans upon the plains of Chalmette ended any British hopes for a presence below Canada or above the Caribbean.

Colonel James Henderson, related to the Dickson, Smith and Crook families in Henderson and Chester Counties, led troops that included many men who would become settlers in West Tennessee, and was memorialized when…

For complete coverage, see the January 15th edition of The Lexington Progress.