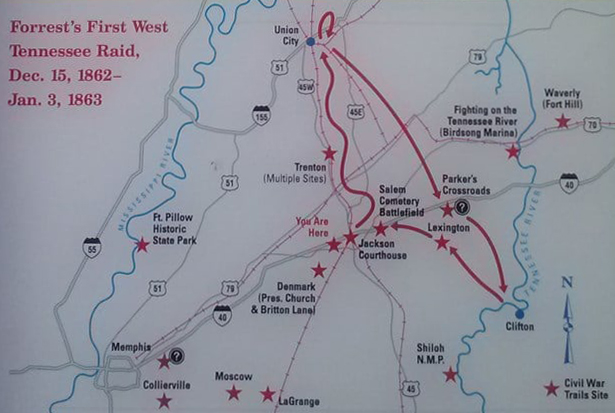 A look at the route used by General Forrest during his first raid of West Tennessee.
Photo Submitted / The Lexington Progress

Gen. U.S. Grant started his first offensive toward the Confederate fortress at Vicksburg, Mississippi in November 1862, by advancing along the Mississippi Central Railroad toward Grenada, Mississippi. Grant was relying on railroads to supply his army as they moved southward.

The Union army held the Mobile and Ohio railroad from about twenty-five miles south of Corinth, north to Columbus, Kentucky; the Mississippi Central from Bolivar north to its junction with the Mobile and Ohio; the Memphis and Charleston from Corinth east to Bear Creek, and the Mississippi River from Cairo to Memphis. Grant realized that his entire command was necessary to hold these lines but assumed that by moving against the enemy in their own uncaptured territory they would be tied up, and “these lines would nearly hold themselves.”

Grant selected Holly Springs, Mississippi as a depot for supplies and munitions of war, all of which were transported over the Mobile and Ohio railroad from Columbus, Kentucky. Small garrisons were placed along the rail line to…

For complete coverage, see the January 1st edition of The Lexington Progress.