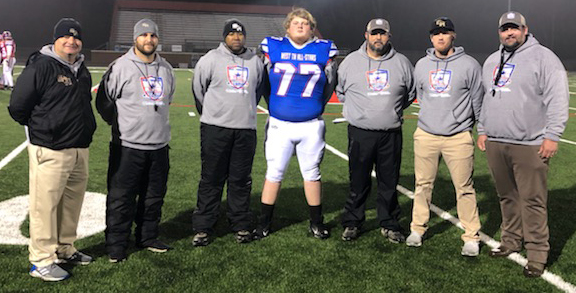 The SHHS Lions coaching staff participated in the 2019 West Tennessee All-Star Football Game as coaches of the South Team.
Photo by: Blake Franklin / The Lexington Progress

The Scotts Hill High School Lions football coaching staff put a final stamp on their season this past Friday evening, December 13, 2019. Coach Woodmore and his assistants were asked by the Hardin County coaching staff to oversee the defensive unit at the West Tennessee All-Star Football Game.

The game was held at the University School of Jackson, and though it was a cold, wet and damp evening, spirits were high as some of the top athletes across west Tennessee performed under the lights one final time. The players were divided into two teams, North versus South, and showcased the all-stars selected from many area high schools.
Ultimately the South won the game, by a score of 16-2. So, you could say that the Scotts Hill High School coaching staff put together one amazing game plan for the young men on the field.

I caught up with coach Rennard Woodmore on Monday afternoon, December 16th. I was privileged to spend some time with him and get his thoughts about the experience and what it all meant to him. In asking what his overall experience was like of the event, he shared with me, “This was a great experience to coach a game like this with my staff. I couldn’t be prouder of all of them.” This was Coach Woodmore’s second time in coaching this game, his first as head coach of Scotts Hill.

In asking him the differences between this game and a regular season game, he said…

For complete coverage, see the December 18th edition of The Lexington Progress.