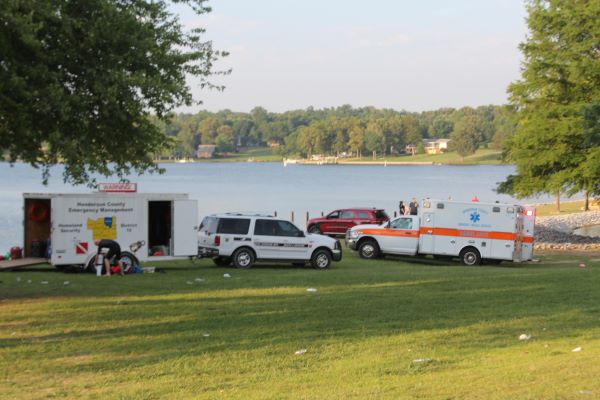 West Tennessee Dive Rescue and Recovery set up a base while crews patrolled the swimming area of Beech Lake on Monday afternoon, May 27th.
Photo By: W. Clay Crook / The Lexington Progress

On Monday, May 27th, crews from the Henderson County Rescue squad, West Tennessee Dive, and Lexington Fire Department were dispatched to the swimming area of Beech Lake for a reported drowning. Witnesses reported that a teenage male had went under and never resurfaced.

Mr. Salazar was from Guatemala and was in the US on a Visitor Visa to be with family who live in the Jackson area. The victim and his family were celebrating the Memorial Day holiday at the lake when tragedy occurred. Mr. Salazar’s death has been ruled as an accidental drowning, according to the Henderson County Medical Examiner’s Office.

Again, we’d like to thank those agencies that assisted with this response, and, especially, want to extend our prayers and condolences to Mr. Salazar’s family and friends, here and abroad.

See the complete story in the June 5th edition of The Lexington Progress.