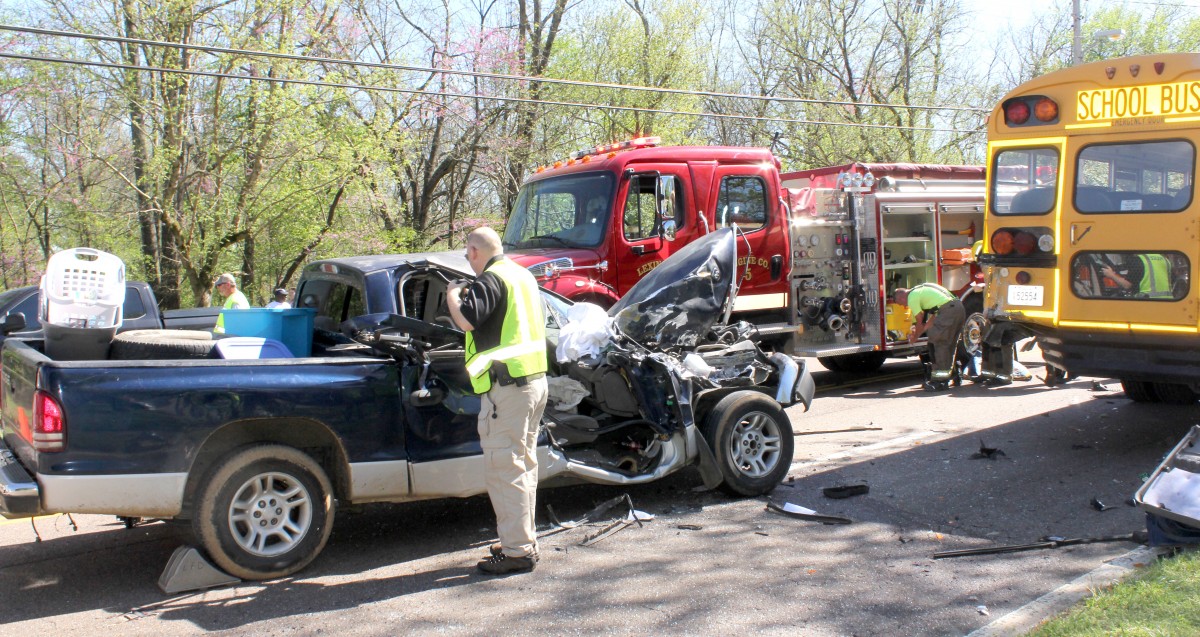 A collision between a pickup truck and a Henderson County School bus happened around 2:20 p.m., on Tuesday, April 9, 2019.
Photo By: W. Clay Crook / The Lexington Progress

By 3:05 p.m. on Tuesday, April 9th, traffic was already snarled along both sides of Broad Street, with Huntingdon Street, the driveway of the Broad Street Church of Christ, and Natchez Trace Drive being in solid lines of vehicles avoiding the accident site. The accident occurred sometime after 2:30 p.m., near the apartments located between the Broad Street Church of Christ and Blimpies. A black pickup truck had collided into the left rear end of a school bus. One bystander said that an older man had been driving the pickup and must not have seen the buses. Both southbound lanes of North Broad Street were blocked by the buses, the inside northbound lane by two Lexington Fire Department trucks, and a Lexington Police Department vehicle across both southbound lanes to ensure safety while children were exited from the buses.

The following release was provided by the Henderson County EMA social media site: “At approximately 3:03 p.m. on April 9, 2019, a Henderson County School bus, with students on board, was struck in the rear by a passenger vehicle on North Broad Street in Lexington.”

“Four students on board the bus were transported to Henderson County Hospital with minor injuries, they were treated and released to their parents. One person in the passenger vehicle had to be extricated by Lexington Fire Department personnel and was transported to Henderson County Hospital and subsequently flown to Vanderbilt University Medical Center in Nashville, we do not have an update on that passenger’s condition at this time.”
“All students on board the bus were accounted for and examined by EMS personnel before being released from the scene. The Lexington Police Department and Tennessee Highway Patrol’s Critical Incident Response Team are conducting an investigation into the incident.”
As this is an ongoing investigation, questions or media inquiries may be directed to the Lexington Police Department at 731-968-6666.

For the complete article and other updates, see the April 17th edition of The Lexington Progress.