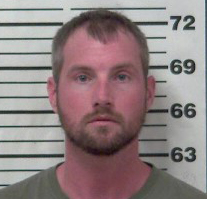 Michael Middleton, of Lexington, Tennessee, has been charged with one count of Aggravated Child Abuse.
Photo Submitted / The Lexington Progress

A joint investigation by the Tennessee Bureau of Investigation and the Henderson County Sheriff’s Office has resulted in the indictment and arrest of a Lexington man in connection with the abuse of an infant. At the request of 26th District Attorney General Jody Pickens, on August 16, 2018, TBI Agents along with the Henderson County Sheriff’s Office began investigating the injuries to an 8-week-old girl. During the course of the investigation, Agents developed information that Michael Middleton, the now ex-boyfriend of the child’s mother, was responsible for the injuries that resulted in…

For complete coverage, see the April 10th edition of The Lexington Progress.