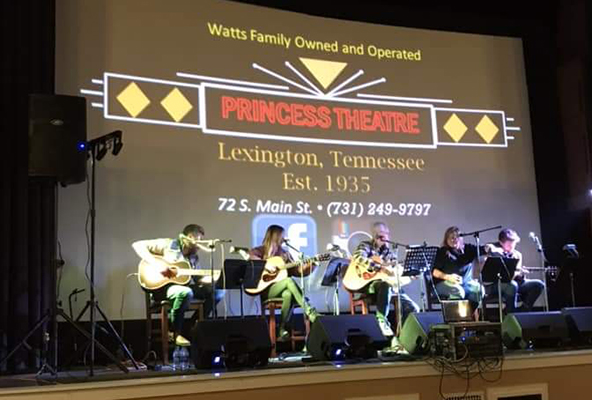 A sold out venue, The Princess Theatre, featured the Sound of Music Songwriters Series on Saturday, October 27, 2018.
Photo Submitted / The Lexington Progress

It was a special night at The Princess Theatre in Lexington, as musicians took their seats amid chairs and instruments decorating the stage in front of the “silver screen.” This was a live performance. “I have been excited to show the flexibility of The Princess as a venue,” owner David Watts remarked a few weeks ago as he hosted campaign supporters for gubernatorial candidate Bill Lee. Watts featured the Sounds of Music Songwriters Series, which turned out to be a sold-out performance showcasing singers, writers, publishers, and producers with local ties. Leading the event was Emmy Award winner Buddy Cannon, his daughter Marla Cannon – Goodman, Jonathan Singleton, and Jessi Alexander.

For this and other interesting articles, see the October 31st edition of The Lexington Progress.