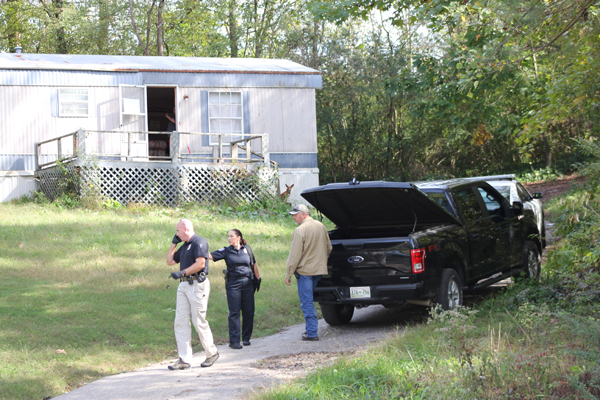 Officers and Investigators with the Lexington Police Department are on the scene where human remains have reportedly been found.
Photo By: W. Clay Crook / The Lexington Progress

Around 1:44 p.m. on Tuesday, October 23rd, a call came over the scanner sending Lexington Police Department to Ayers Street, where human remains had reportedly been found. Four LPD vehicles were at the site with Captain Jeff Middleton, Chief Investigator Scottie Kizer, Captain Donna Hetherington, and officers Wendy Nichols and Josh Reed. Officers spoke to residents in the mobile home located there and made several trips behind the residence into the wood line.

At 2:05 p.m. Captain Middleton confirmed that a forensic team had been requested to assist with human remains, which had been discovered in the woods atop a hill in the 300 block of Ayers Street. “The remains appear to have been there for some time,” Middleton reported. No gender or age could be determined at this time.

Continue to check this site for updates, and the October 24th edition of The Lexington Progress.