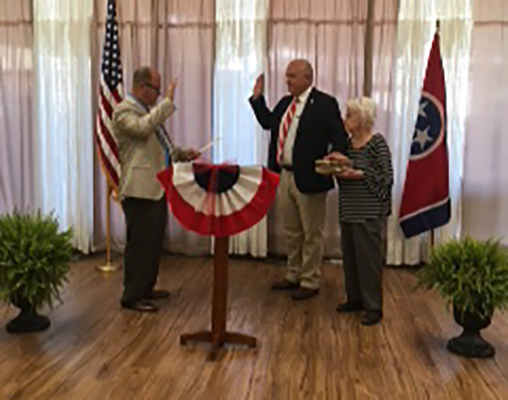 On Tuesday evening, September 4th, Henderson County Mayor Eddie Bray swears in mayor and board of aldermen for the town of Sardis.
Photos Submitted / The Lexington Progress

Henderson County Mayor Eddie Bray was called upon to conduct the swearing in ceremony for the mayor and board of alderman for the town of Sardis. The event was held on Tuesday evening, September 4th, at the Sardis Senior Center. Taking the oath for mayor was Joseph G. Hudgins, Sr., with Teresa R. Beecham, Richard Holland, Kenneth Scott, Larry Smith, and Gail Wade being sworn in for aldermen. A gracious reception followed the ceremony at the Senior Center, followed by a brief town meeting. City Recorder, Wayne Scott, said that the board used the time to get acquainted and also closed out the water grant project.

For this and other interesting articles, see the September 12th edition of The Lexington Progress.