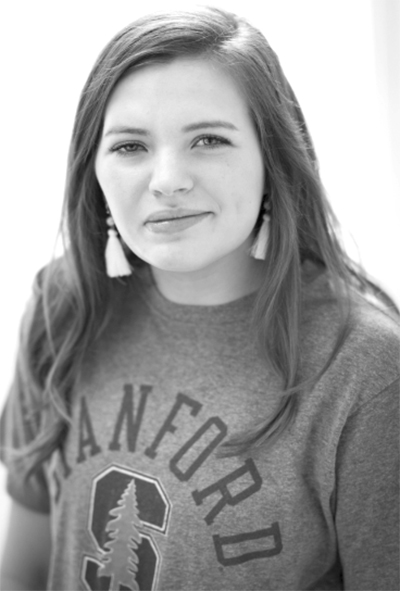 Mimi Tarter will attend Stanford University and get her pre-med requirements and attend Medical School.
Photo Submitted / The Lexington Progress

Between two surgeries to remove a brain tumor, MiMi Tarter, 18, won multiple awards in district and state fine arts competitions. Tarter, a recent graduate of Live Oak Classical School, received the “Female Fine Arts Student of the Year” award from the Texas Association of Private and Parochial Schools for her division. In district and state competitions, Tarter also took home awards for “Best Actress.” Since fifth grade, Tarter has enjoyed acting. “I see it as a way of, I guess, relating better to others,” Tarter said. “I love acting, because it’s like an exploration. I really love collaborating with other artists or actors. I love rehearsal and acting on stage. I think it’s also a really cool way to explore humanity, if that makes sense.” But in her junior year of high school, Tarter started to experience hearing loss in her right ear, leading her down an unexpected path. “We went to a neurosurgeon, and he said this tumor is causing double vision,” she said. “It’s blocking the spinal fluid from draining, so there’s swelling on your brain. We need to operate in a week.” The benign brain tumor was the size of an egg. In the middle of her junior year, Tarter was out of school for two months recovering from surgery. The surgeries continued through her senior year. This past December, she had surgery to restore hearing in her right ear.
In May, Tarter graduated high school and then went back into surgery to remove another piece of the tumor. Between surgeries, Tarter competed in district and state TAPPS competitions, her favorite being the one-act play called “These Shining Lives.” “It was about the Radium Dial girls in Illinois. They would paint the glowing numbers on clocks and to make their brushes more precise they would lick their brushes,” she said. “The company never told them, even though they knew, radium (in the glowing paint) could cause cancer. So it’s about their journey.” Tarter said the best part of competing in TAPPS were the friends she made. “MiMi has been a beacon of bravery and resilience over the last year, enduring multiple surgeries and complications,” said Justin Rosolino, dean of upper school at Live Oak Classical. The brain tumors caused Tarter to take a step back and reconsider her life, she said. “I know there are a lot of other people who go through much more difficult things,” Tarter said. “It gives me more appreciation for the life I have and the school I’m privileged to go to.”
Because of the surgeries, Tarter has partial facial paralysis, a lasting side effect she said changed the way she sees other people. “When you look in the mirror you can definitely see it, whereas you can’t really see a tumor,” she said. “I feel like I don’t really look like myself anymore. I don’t look like what I personally feel like, personality wise. I think that’s been really important to me. ‘Wow, have I been judging people for what they look like?’ That’s really not fair to them.” Tarter said she was lucky to have had a supportive network during those trying times. “The support I’ve gotten over these two years has been really overwhelming and really sweet,” she said. With graduation and a series of surgeries behind her, Tarter is looking forward to her future at Stanford University.“I hope to major in theater, but I also really love biology,” she said. “So, I’m going to get my pre-med requirements and then go to med school. But that could all change. I have a lot of things I’d like to do in college.”

Printed with permission by and courtesy of the Waco Tribune-Herald

For this and other interesting stories, see the July 18th edition of The Lexington Progress.