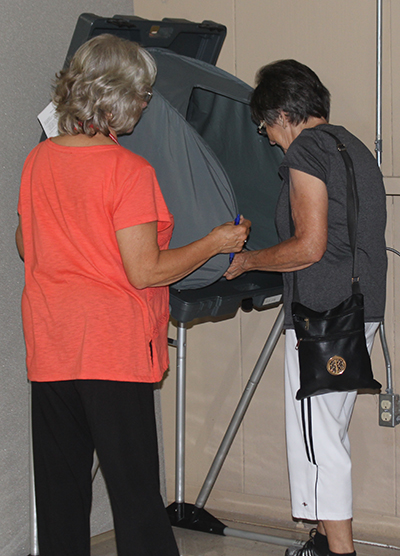 Attendance at the polls has been good during the early voting period, thus far.
Photo By: W. Clay Crook / The Lexington Progress

Early voting was off to a great start in Henderson County, beginning on Friday morning, July 13th. Lines stayed steady from opening throughout most of the day. Bill Martin, with the Election Commission, said that 633 votes were cast by the close of the day on Monday. The three day total is close to half of the 1,524 total early votes cast in 2014. As of press time on Tuesday, July 17th, early voting totaled a little over 750 votes. Early voting will end at noon on Saturday, July 28th, with the regular election to be held on August 2nd. Early voting hours are: Mondays, Wednesdays and Fridays from 9:00 a.m. until 4:00 p.m., with extended hours on Tuesdays and Thursdays from 9:00 a.m. until 6:00 p.m. On Saturdays (July 21st and 28th) early voting is available from 9:00 a.m. until 12:00 p.m. Voters will select one of…

For complete coverage, see the July 18th edition of The Lexington Progress