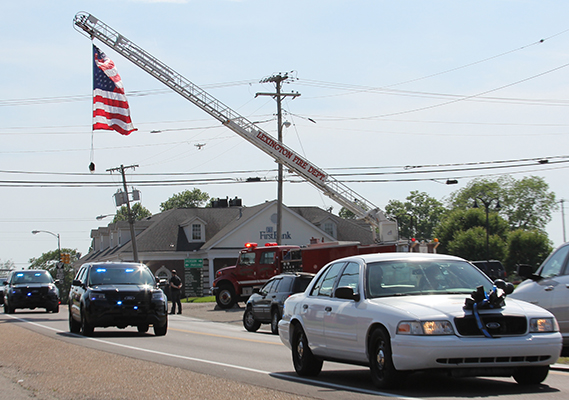 With the passing of Mr. Max Ray Hays, there is now a vacancy for the 1st District Constable seat, for the election in August.
Photo By: W. Clay Crook / The Lexington Progress

At 3:36 p.m. on Thursday, May 10th, the Henderson County 911 Dispatcher gave the last call for former car 101, as the funeral procession departed for Constable Max Ray Hays. A ladder truck from the Lexington Fire Department draped a large American flag over Natchez Trace Drive as a tribute to his service of 37 years with the Lexington Police Department. On May 1st, Hays once again won the Republican Primary for the 1st District Constable seat over two other candidates, Michael Danese and Jeffrey Howard, Jr., however, his passing leaves a vacancy for the election in August. Administrator of Elections, Dan Miller, said that the Executive Committee for the Henderson County Republican Party would be responsible for choosing the replacement for Hays for the August 2nd ballot.  After contact with Scott Golden, State Republican Party Chairman, the selection for a 1st District Constable will be done by a caucus of 1st District Republicans, that will be held at the Courthouse on June 7th, at 7:00 p.m. The Henderson County Republican Party will run information in The Lexington Progress with further details.