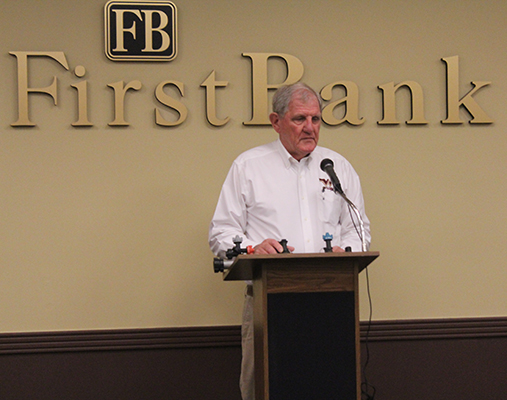 Mark Bartel, with Engineer Spray Components, announces the opening of twenty-two new positions and the expansion of the facility.
Photo By: W. Clay Crook / The Lexington Progress

Lexington City Mayor Jeff Griggs and County Mayor Dan Hughes called a special meeting together at the FirstBank Community Room at 10:00 a.m. on Thursday, May 17th, to make a special announcement on the expansion of a local industry. Mark Bartel, of Engineer Spray Components, a local industry housed in facilities on Sea Horse Drive, announced ESC would be adding twenty-two new positions (twelve new positions immediately; twenty two total over time). The industry was founded in 1995, and in conjunction with Wilger Inc., manufactures spray nozzles and components for agricultural use. Bartel also announced that the company has recently patented a new spray nozzle that significantly reduces wind drift. Special guests include Representative Steve McDaniel, Senator Delores Gresham, Chelsey Scott with the Tennessee Economic Development Council, and Bobby Dyer with the Lexington Industrial Board. Also in the audience were members from each of the municipalities, the county commission, city boards and department heads, and the Chamber of Commerce. Bartel said ESC, which has a payroll of about $1.3 million, will expand another $700,000.00 to cover payroll and benefits for the new positions, and will add another 7,000 square feet to the facility. ESC and Wilger Inc. do business “nearly worldwide” said Bartel, with accounts in Central and South America, Canada and the U.S., Europe, China, and several points in between.