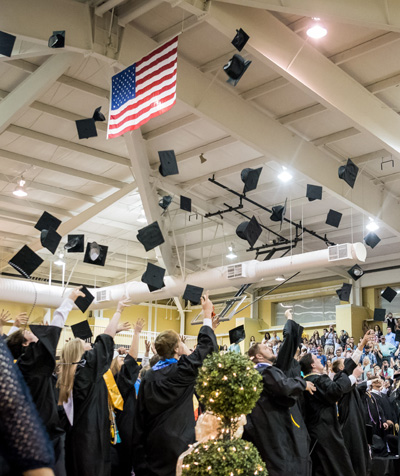 Scotts Hill High School graduated 117 students during their ceremony on May 17th, with the invocation being led by Samuel Umstead. Historian for the 2018 graduating class was Lauren Scott, daughter of Kenny and Kelly Scott, and the Salutatorian was Ava Williams. Ava is the daughter of Brian and Dana Williams. Valedictorian for the class was Caitlin Mitchell, daughter of Bob and Jennifer Mitchell, and Teacher of the Year was awarded to English instructor, Karen Thompson.
Lexington High School held its graduation ceremony on Friday evening, May 18th, with a graduating class of 231 students. The invocation was given by Antonio Posey, and the Class Historian was Larrya Stegall, daughter of Larry and Tonya Stegall, who had a GPA of 99.8620. The Salutatorian was Eryn Adkins, daughter of Troy Adkins and Jennifer Newsom, who had a GPA of 99.8965.

Matthew Sanders, son of Conley and Laurie Sanders, was the Valedictorian, with a GPA of 100. A new ranking was added this year, the “Tiger Scholar,” which was awarded to Jacob Renfroe, son of Phillip and Dachelle Renfroe. The ranking is determined by an average of the GPA and ACT score.  The Book of Names was passed down by Senior class president, Tanner Adkins, to Junior Class president, Elijah Ujcich, and Teacher of the Year was awarded to Spanish instructor, Jaivel Snelling.