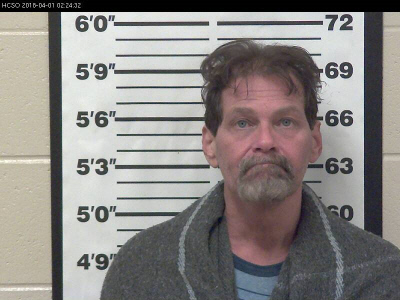 David B. Brooks, age 54 of Lexington, was arrested on April 25th with multiple charges, including Especially Aggravated Kidnapping and Aggravated Assault, and is being held under a $500,000 bond.
Photo submitted / The Lexington Progress.

David Bryan Brooks, age 54, received multiple charges, including Especially Aggravated Kidnapping, Domestic Assault, Possession of a Synthetic Canniboid, and Aggravated Assault, on April 25th in conjunction with an incident on Helms Street in Lexington. Officer Brad Wilson of the Lexington Police Department executed arrest warrants that allege Brooks discharged a handgun in the presence of the victim, and used a foreign object to assault the victim repeatedly. The warrants also allege that the handgun was placed to the head of the victim and fired without a cartridge.
Brooks then was alleged to have restrained and confined the victim in the basement of the home. According to the court documents, Brooks had dated, lived with, and had a sexual relationship with the victim in question.

Brooks is incarcerated in lieu of a $500,000.00 bond. His next scheduled court appearance is for 8:30 a.m. on June 6th, at the General Sessions Court of Henderson County.

For this and other interesting stories, see the May 9th edition of The Lexington Progress.